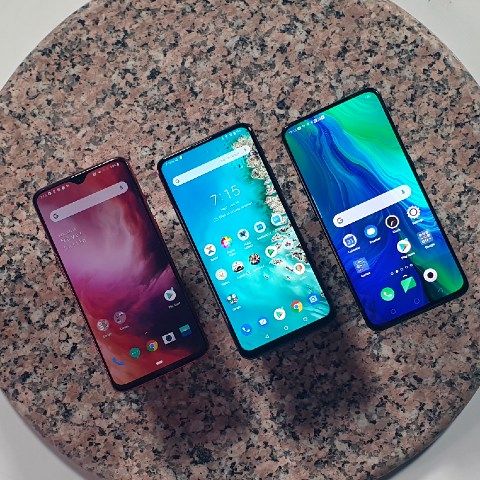 The Qualcomm Snapdragon 855 flagship processor is here to stay. June is high-end smartphone season and we already have a handful of them with the Asus 6z(₹ 30999 at flipkart) being the most recent release. Qualcomm announced the flagship chipset back in December and it took some amount of waiting and anticipation to get hold of a few devices to see how the flagship processor performs in 2019 high-end smartphones. With the Asus 6z now in the open, we pitted the popular Snapdragon 855-powered smartphones to find out the best performing smartphone for both your daily tasks and intensive gaming.

The Snapdragon 855 is a powerful processor. It’s Qualcomm’s most advanced mobile platform that’s built to deliver higher clock speeds as well as complete AI tasks faster along with improving the quality and rendering speed of graphics. We relied on popular synthetic benchmarks to compare where each of these high-end smartphones stands against each other. It’s the easiest way to determine the fastest phone, but not always the most comprehensive way to understand the overall performance. So we also put in a few hours of gaming in the mix. We played Injustice 2, Asphalt 9 and PUBG Mobile and clocked the frame rates and stability using Gamebench. Furthermore, we put these phones through the hoops of editing and stitching 15 RAW images shot from a Nikon D800E into a panorama to see how the processor and the 8GB RAM hold up. 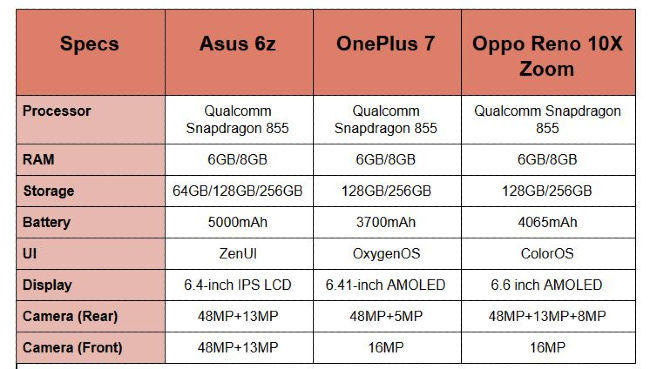 All the phones in this comparison are powered by the Snapdragon 855 and have 8GB RAM and 256GB storage. The basic hardware under the hood is the same, but the software-hardware harmony will be the key factor in determining the best performing smartphone. In that regard, the OnePlus 7 relies on OxygenOS 9 while the Oppo Reno 10x zoom(₹ 38990 at flipkart) is powered by ColorOS 6 and the Asus Zenfone 6 runs on ZenUI. There are deep-seated optimisations in all three of these devices that promise better resource management, and as a result, faster app launch speeds and processing are what we expect from them. Which is the fastest phone of 2019 so far? Let’s find out.

Benchmark numbers for CPU performance was a mixed bag. Each of the phones was ahead in one test or another, making things a little confusing. So we looked deeper into the results. In Geekbench 4 single core test, it’s the Asus 6z that’s ahead of the three with 3537 points while in multi-core tests, the Oppo Reno 10x zoom is ahead with 11108. Looking deeper, we figured the Asus 6z handles integer and floating point calculations much better than the three on a single core, while the Oppo Reno handles the calculations better by juggling the eight cores across three tiers. That’s just the CPU. Overall, it’s the OnePlus 7 that seems to be ahead, according to AnTuTu which also takes into account the CPU, GPU, UX and memory. There, the OnePlus 7 came out on top with 367234 points, one of the all-time highest scores we have seen on Android devices. The OnePlus 7 uses UFS 3.0, which is a generation ahead of the storage module used in the other two high-end flagships.

Moving on, we examined the Mobile Xprt 2015 scores which actually simulates some frequently used tasks to see how fast the phone can finish it. The results were really close to each other but the OnePlus 7 outsmarted the other two by a hair. Finally, the PCMark Work 2.0 that also simulates real-world usage but in a more intensive manner gave the Oppo Reno 10x zoom the highest score of 8889 among the three.

In this case, the Snapdragon 855 is the star of the show with a big leap in performance. In fact, comparing the AnTuTu score of the OnePlus 6T McLaren Edition which gave us the highest score for a Snapdragon 845 device, the OnePlus 7 is faster by 19 percent, which is the average boost in performance for all Snapdragon 855 devices we have seen so far. In this comparison, the CPU is more or less equally powerful for all the three high-enders.

GPU performance was interesting to note. The Snapdragon 855 offers the Adreno 640 GPU that uses 50 percent more Arithmatic Logic Units (ALUs), boasting of 20 percent boost in graphics rendering speed. Qualcomm has also implemented some interesting new features like Physically-based rendering, HDR upscaling, jank reduction and the likes to improve gaming. As a result, the Adreno 640 is by far the most powerful GPU you can have on an Android smartphone presently. This can clearly be seen on benchmark numbers.

On 3DMark Slingshot, the Oppo Reno 10x zoom raked the highest score of 7550 followed closely by the OnePlus 7 and the Asus 6z. On GFX Bench though, it’s the OnePlus 7 that comes out on top, but once again, only by a hair. This one was closely fought and the results indicate that the devices are more or less equally capable in rendering graphics. However, that doesn’t always convert to better gaming as we have seen multiple times in other smartphones. But before we delve into the gaming performance, let’s see how they handle AI tasks.

AI features are all the rage in smartphones these days with OEMs finding new ways to implement machine learning and computer vision into the camera, battery, and what not. As a result, a phone’s AI performance is also an important indicator of how good the overall smartphone performance is. We used AI Benchmark and PCMark’s Computer Vision test to determine the best phone for AI workloads. Both tests use a database of images to see how fast the smartphone can recognise what’s in them. The final scores indicate the Asus 6z uses the AI Engine on the Snapdragon 855 to its best capacity.

Now let’s look at gaming. We took three games for consideration — Injustice 2, Asphalt 9 and PUBG Mobile and clocked the frame rates and stability using Gamebench. The OnePlus 7 seems to be the best phone for gaming out of the three. The Oppo Reno 10x zoom's gaming performance, especially in PUBG Mobile, felt good while playing but when we examined the frame rates we found the Reno actually had the lowest frame rate in PUBG Mobile. All three phones managed to run Injustice 2 at 60FPS but the Reno was the most stable out of the three. The Asus 6z proved to be well optimised for Asphalt 9 but not much for PUBG Mobile where stability was the lowest. What matters is the fact all the three phones seem to offer pretty decent gaming performance and buying any of these for gaming will not be a bad decision. Of course,  there are the gaming phones that launched recently in the same price-segment, but they are made solely for gaming and you might not get a good camera or a lightweight design.

How well a smartphone handles high-end games is a good indicator of performance, but it’s not the only way to determine the limit of a phone’s performance. Considering these are modern-day flagships, your daily tasks of browsing social media, clicking photos and reading articles will hardly stress the phone’s processor. Which is why we took an unrealistic task to measure how far the device can push itself to meet the demand, and the results were fascinating. Despite all three devices rocking the Snapdragon 855 chip along with 8 gigs of RAM and 256 gigs of storage, it’s the OnePlus 7 that managed to stitch a panorama out of 20 RAW images taken using a Nikon D800 the fastest out of the three. The OnePlus 7 managed to complete the task in 1 minute 56 seconds while both the Asus 6z and the Oppo Reno took well above 2 minutes to finish the task. It only goes on to prove how well optimised OnePlus’ OxygenOS 9 really is. Despite having similar hardware under the hood, OnePlus’ software is well optimised to make the most out of the hardware.

The OnePlus 7 indisputably comes out on top in most of the benchmark tests. There are some instances where the Asus 6z and the Oppo Reno 10x zoom wins, but overall if you look at the results, it’s the OnePlus 7 that makes the best use of the flagship processor and ample amount of RAM and storage. However, the key takeaway from this comparison is not which is the fastest phone, but the fact that the gap in performance between the three phones is so little, that it will feel negligible. Yes, the OnePlus 7 delivers better frame rates and finished the daunting task of batch processing 20 RAW images the fastest, but that doesn’t negate the fact the Asus 6z is nearly as good and so is the Oppo Reno 10x zoom. Fortunately, raw performance and good gaming capability is something most high-end phones are more or less guaranteeing. It’s the finer things like the camera performance, battery life and the display along with the design and durability that becomes the key factors to consider when choosing a high-end smartphone.