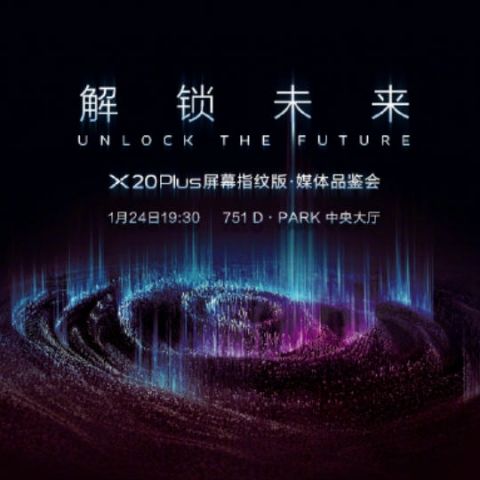 Vivo will be unveiling the world’s first smartphone with an under display fingerprint on January 24, at an event in China. The company has teased the launch of the phone on Chinese microblogging website, Weibo and had showcased it at CES 2018. The phone will be a variant of the company’s current smartphone, the Vivo X20 Plus, but will sport an under display fingerprint sensor. It is not yet known if the device will come with different hardware as compared to the standard X20 Plus.

Last month, Synaptics had announced that it was ready with its in-screen fingerprint sensor and stated that it collaborated with a “top 5” company, which turned out to be Vivo. While Vivo had demonstrated the technology at MWC Shanghai, it did so using Qualcomm’s sensors. It seems like Vivo has ditched Qualcomm in favour of Synaptics’ solution.

Embedding the fingerprint sensor under the display seems to be the solution to a problem faced after shrinking the size of the bezels. Samsung was forced to move its sensor to the rear of its smartphones, while Apple ditched the system entirely in favour of facial recognition.

As for the smartphone itself, the device should be pretty much the same as the standard Vivo X20 Plus smartphone that offers a large 6.43-inch Super AMOLED display with a resolution of 2160 x 1080 pixels. The phone is powered by a Snapdragon 660 processor with 4GB of RAM and is available in 64GB and 128GB variants. At the back of the phone is a dual-rear camera setup with 12MP and 5MP cameras, while at the front is a single 12MP unit. It is not yet known if Vivo will release the new phone globally.