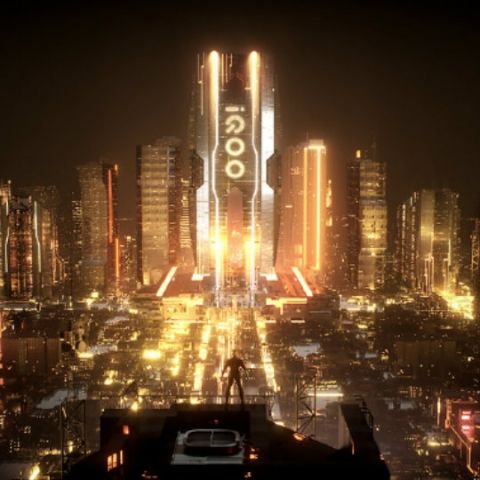 Last week Vivo announced a sub-brand IQOO and it was reported that the first phone offered by the company would be a foldable device. However, in its first public appearance during the broadcast of the NBA All Star game, the phone looked like a regular device sporting a rear triple camera setup. From the back, the design of the phone looks familiar to the one we have already seen in devices offered by Huawei and Honor.

The presenter showcased the back of the phone and in the video, which you can find below, we could see three cameras aligned vertically and are located on the top left corner. There is flash just below the triple camera setup and some text in the lower left bottom. The text is not clear but it could be the branding. The back panel is also seen having a blue gradient texture. There is no visible fingerprint scanner, which could mean that the phone may sport an in-display fingerprint sensor.

Reportedly, the company will incorporate a sixth-generation in-display fingerprint sensor. As far as the display is concerned, the presenter did not show the phone from the front. It could have an edge-to-edge display and a pop up camera front for selfies - just like we have seen in the Vivo Nex. Vivo will also be launching the V15 and V15 Pro later this week and the teasers suggest that the phone will have a pop-up selfie shooter. The specifications of the phone remain a mystery but a previous leak said that the phone could be priced at CNY 7000 which is approx Rs 74,000. This price tag essentially puts the phone in the premium category, hence, it is expected that it will have a Qualcomm Snapdragon 855 processor under the hood. The processor may be coupled with up to 8GB of RAM. IQOO hasn’t released the launch date of the phone but it is expected to unveil it in a few weeks.