Multiple reports circulating the web suggest that a new JioPhone model is in the works and has been "spotted." The reports also suggests that the so called “New” JioPhone runs Facebook and YouTube apps. However, this is not the case as confirmed to Digit by Jio employees.

Secondly, as confirmed to Digit by a Jio employee, the images and videos of the alleged “new” JioPhone with slightly more rounded edges and a larger display, belong to a testing device which was an early design rolled out only for Jio employees. The actual JioPhone unit being rolled out to customers will be the one that has been shown in the main image of this article.

Further, reports also claims that the JioPhone supports USB tethering, however, as per what Jio employees have told Digit, the tethering feature, be it USB or Wi-Fi, is not available on the final unit of the device shipping to customers. The functionality may function on the device at a later date post an update. 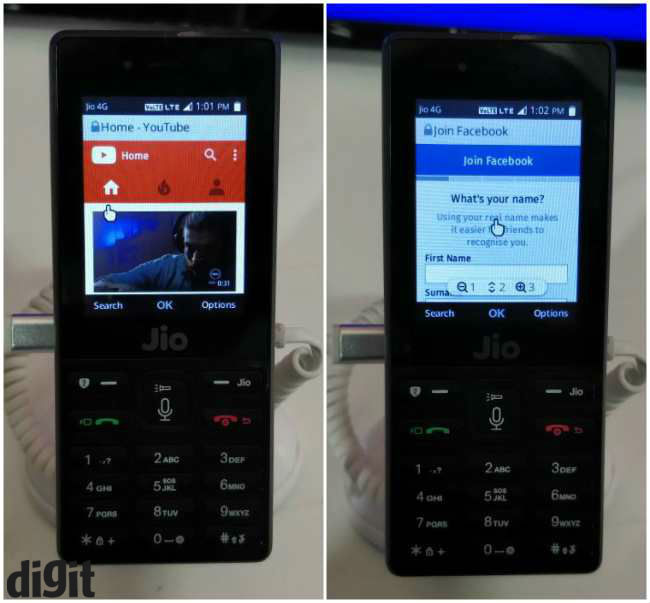 The JioPhone will supports a bunch of apps including, JioMusic, JioCinema, JioTV, JioXpressNews, JioVideo, JioGames, JioChat, Facebook Web app, YouTube web app, Google Maps, Firefox, Chrome, and more. This is not new and has been known for a while. The device will not support WhatsApp, however, as per sources the Kai OS team is in talks with WhatsApp to bring the app onto the 4G feature phone soon. Users will also have an option to purchase the JioPhone TV Cable separately, to be able to mirror the display of the device onto a television screen. Head here to see how the JioPhone TV Cable functions.

As per a report, the JioPhone is expected to reach 6 million customers before Diwali. Second round of pre-bookings for the device will begin in the next few days, as per sources.