The Spice Dream Uno H has a full Hindi keyboard and other Hindi-centric features. The device will be sold in all major retail stores. 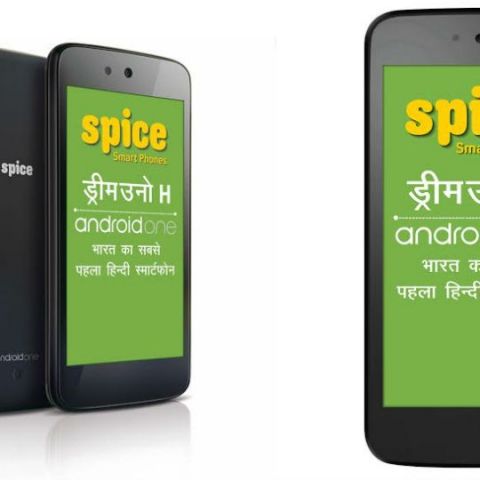 Homegrown smartphone maker Spice has launched the first Hindi Android One smartphone. The device, Spice Dream Uno H, is the first smartphone to feature a complete Hindi keyboard, voice input along with Hindi versions of Android and popular Google products such as Chrome, Search, YouTube and Google Maps.

The device has a 4.5 inch IPS display along with a 1.3 GHz quad-core processor and Android 4.4.4 KitKat. It also has a 1700 mAh Li-Polymer battery and expandable storage of up to 32 GB. It is priced at Rs. 6,499 and offers 2G and 3G connectivity options. The device also has a 5 MP rear camera along with a 2 MP front camera.

Spice, along with Micromax and Karbonn, was the first of three manufacturers to join Google’s Android One program. The company launched the Spice Dream Uno, which was its first Android One device. The Micromax Canvas A1 and Karbonn Sparkle V are the two other Android One smartphones available in the market right now.

Instead of going with the online model, Spice has opted to sell the Dream Uno H in all major retail stores in the country. This makes sense, as the phone seems to be aimed at the tier II and tier III cities in India, which aren’t big on buying online yet.