The Xperia XA2 Ultra is rumoured to launch this month. It could be powered by Qualcomm’s Snapdragon 630 SoC coupled with 4GB RAM/ 64GB ROM. 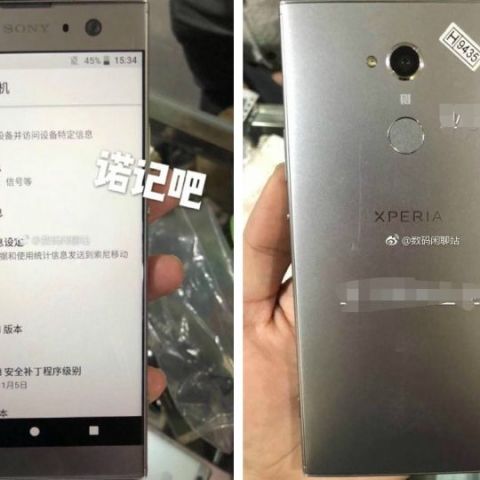 Sony seems to be working on a new Sony Xperia XA2 Ultra smartphone, which might come with dual front cameras. As per the leaked image of the device, via Xperia Blog, the smartphone is seen featuring a front-facing LED flash along with the dual front camera setup and sports a rear-mounted fingerprint sensor. Sony could also go with a single rear camera, which might be placed centrally.

If the images are to be believed, the Xperia XA2 Ultra looks akin to its predecessor, the Xperia XA1 Ultra, in terms of design. It still sports a 16:9 display aspect ratio and retains the thick bezels on top and bottom of the display. The smartphone is expected to run on Android 8.0 Oreo out-of-the-box and come in model numbers of H4213 and H4233.

According to the report, the upcoming Xperia smartphone could be launched this month and is tipped to skip on the stereo speakers as well. In terms of specifications, the Xperia XA2 Ultra is expected to feature a 6-inch FHD display with 16:9 display aspect ratio and is rumoured to be powered by the Qualcomm Snapdragon 630 chipset with 4GB RAM and 64GB of onboard storage.

As mentioned earlier, the Xperia XA2 Ultra will be the successor to the Xperia XA1 Ultra, which was launched in July last year in India. The Sony Xperia XA1 Ultra sports a 6-inch Full HD display and is powered by a MediaTek Helio P20 chipset coupled with 4GB RAM and 64GB of internal storage, which can be further expanded up to 256GB via an SD card slot.