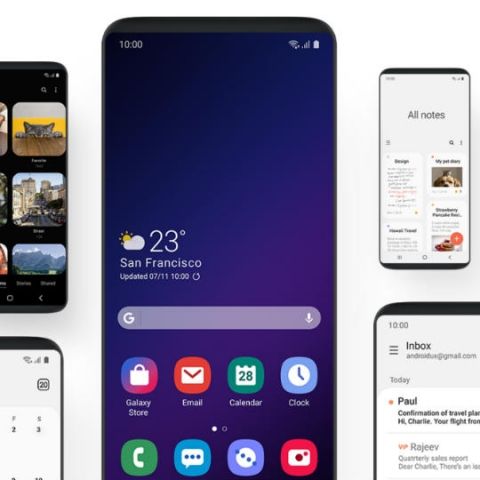 At the Samsung Developer Conference, the company announced a new UI for its foldable devices and smartphones called the One UI. The UI will replace Samsung’s current UI on its flagship devices.

At its developer conference, Samsung announced its new UI called the One UI. The UI aims to make navigating a smartphone a lot simpler. The UI will release in beta in the coming weeks and will roll out to the Galaxy S9 and Galaxy Note 9 family of devices. Android Authority has confirmed that the new UI will also come to older flagship Samsung devices like the Note 8 and S8 family of smartphones.

Samsung is currently accepting beta sign-ups for the One UI which is expected to roll out for the S9, S9 Plus and the Note 9 this month. The beta will be available in China, France, Germany, India, Poland, South Korea, Spain, UK, and USA. Those interested in participating in the beta can download the Samsung Members application from the Galaxy App store or the Google Play Store. After logging in, users can go to Notices and select “One UI Beta Program Registration” to apply. Once signed up, users need to go to Settings and then update software and select the “Download Updates Manually” option. This will allow the software to update and load the beta version of One UI.

With the introduction of One UI, Samsung is looking to make single handed operations on its devices a lot easier. Users will see common operations that rested on the top of the display at the bottom and reaching critical actions including bringing down notifications can be done with a single swipe from the middle of the screen. With smartphones getting larger in size, single handed operation is nearly impossible, and Samsung is looking to change that.

The UI is also a more stripped-down version of Samsung’s TouchWiz UI, giving it a more stock Android like feel with a touch of Samsung. Samsung will also introduce its own version of Dark Mode in the UI called Night Mode “for a comfortable experience in the dark”. Samsung’s One UI will be based on Android 9 Pie and there is no information on what other devices the UI will make its appearance on apart from those mentioned above.