The successor to the Samsung Galaxy S10 is all set to launch on February 11. As the launch date closes in, we are getting more and more information about the upcoming devices. Apparently, the Galaxy S10 successor is likely to be called Samsung Galaxy S20 - at least the leaked live images say so. The latest leak reveals a new design language for the 2020 Samsung flagship devices.

The development comes from XDA-Developers, who have revealed the live images of Samsung Galaxy S20+. The pictures show the front and rear of the device. It shows a punch-hole display like the Galaxy Note10 and new rear camera setup. We can see a total of 4 cameras and a flash in the rectangular camera module. There is a volume rocker and a power button on the right side of the phone. Moreover, no Bixby button can be seen anywhere. 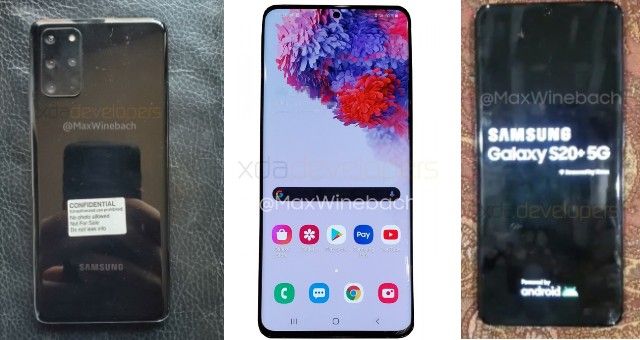 The Samsung Galaxy S20+ is likely to come with less curved display. It is tipped to use 2.5D glass instead of Samsung’s usual curved glass. The punch-hole selfie camera module is centred and smaller than in the Galaxy Note10. The bezels appear to be minimal on all four sides. Samsung is rumoured to use a custom 108MP primary lens on the most premium Galaxy S20 device.

Samsung Galaxy S20 trio is said to feature a telephoto lens with 48MP. If it turns out to be true, it will be the most powerful telephoto lens in a smartphone going by the current industry standards. The trio is expected to come in 6.2/6.4 inches, 6.7 inches, 6.9 inches display sizes.