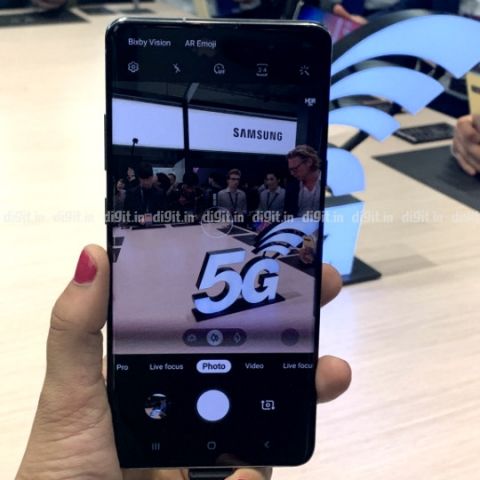 Samsung will release the Galaxy S10 5G on April 5 in the domestic market, a media report has said. This will be the company’s first device with the next-generation network capability. According to South Korean news agency Yonhap, the phone will go on sale on the specified date without a pre-order programme. Citing industry sources, the media platform said that the phone is expected to cost around 1.5 million won ($1,332 or Rs 92,000) in the country.

“For those who register the phone from April 5-16, Samsung offers its wireless earphones, Galaxy Buds, and a wireless charging package, along with a 50 percent discount on replacing displays, valid for a year,” Yonhap cited the company as saying. The report notes that the state-run National Radio Research Agency said that the Galaxy S10's 5G model has passed its signal verification test.

When it comes to providing the infra for the 5G network services, it has been reported that the three South Korean mobile carriers have been preparing to roll out their commercial 5G service for the 5G variant of the Galaxy S10. In the US, the 5G smartphone will be sold exclusively via Verizon. It’s expected to come to AT&T, T-Mobile and Sprint as well. Meanwhile, Motorola is also expected to introduce a 5G Moto Mod with Moto Z3.

There are a few changes from the Galaxy S10+ when it comes to hardware in the Samsung Galaxy S10 5G. It sports a giant 6.7-inch display as compared to the Galaxy S10 Plus’ 6.4-inch panel. It’s the same Infinity-O Dynamic AMOLED display with HDR10+ certification and two cameras sitting in the pill-shaped cut-out on the top right corner. It also packs a huge 4,500mAh battery that can be fast-charged with the bundled 25W fast charger. The phone also supports wireless and reverse wireless charging tech.

Under the hood, the Samsung Galaxy S10 5G comes with the Qualcomm Snapdragon 855 mobile platform integrated with the Qualcomm Snapdragon X50 5G modem. The modem is expected to draw more power, hence the 4,500mAh battery. The phone offers 256GB of storage without the option to expand it though and has 8GB of RAM. In the camera department, the Galaxy S10 5G has a setup similar to the one on the Galaxy S10 Plus but it adds a 3D ToF sensor on the back that allows “Video Live Focus” and a “Quick Measure” app.