Star Wars: The Rise of Skywalker will hit theatres on December 20 and it looks like Samsung has chosen the dark side for its limited Star Wars special edition Note10+. Samsung’s press page reads, “The collaboration will unite two Galaxies – a galaxy far, far away, and the Samsung Galaxy – to generate excitement for the final instalment in the Skywalker saga.” The special edition Galaxy Note10+ will be bundled with a specially designed case, a metal badge, an S Pen, and Galaxy Buds. The bundle also comes with exclusive Star Wars-themed content including wallpapers, shutdown animations, icons and sound effects. The special edition will be available in the US starting December 13 at $1300 which is roughly Rs 93,000 directly converted. Apart from the US, the device will be available in Australia, Denmark, Finland, Germany, Hong Kong, Korea, Norway, Russia, Spain, Sweden, Turkey, UAE, and the UK. In the US, the device will be available via Amazon, select Best Buy stores, select Microsoft stores, Samsung.com and the Samsung Experience Stores. There is no information on whether the special edition will make its way to India.

Speaking of the Special Edition Galaxy Note10+, Samsung has decided to go with the Dark Side for this one. The smartphone is black in colour with a First Order logo at the back and a very Kylo Ren red S-Pen. The Galaxy Buds that come with the device are black and the inside of the case is red in colour. If you are considering picking up a Galaxy Note10+, you can check out our review of the smartphone here. 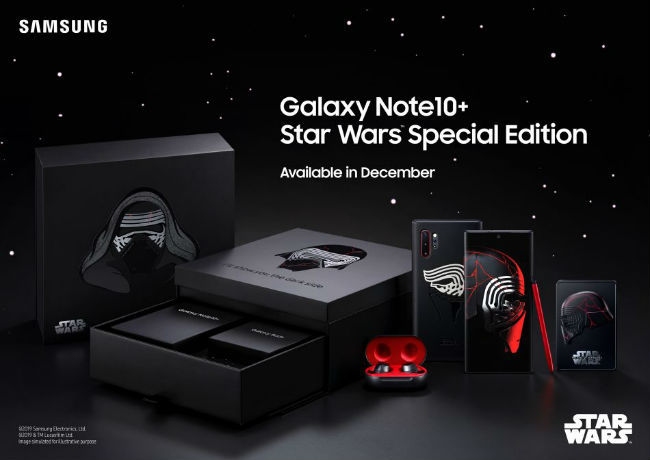