The Samsung Galaxy Note10 price in India starts at Rs 69,999 for the 8GB RAM and 256GB storage variant. The phone doesn’t have a microSD card slot. In contrast, the Galaxy Note10+ will cost users Rs 79,999 for the 12GB RAM + 256GB storage variant, which also sports a microSD card slot for up to 1TB of storage. The company hasn’t revealed the price of other variants yet.

Samsung is offering discounts to consumers who pre-book the Galaxy Note10, Note10+. Consumers pre-booking the new flagship devices using HDFC credit or debit cards at retails outlets and Samsung.com/in will get a cashback of Rs 6,000. Moreover, buyers using ICICI credit or debit cards on Amazon, Flipkart, Paytm, and Tata CliQ will get a cashback of Rs 6,000 as well.

The two new flagship devices will be available in Aura Glow, Aura White and Aura Black colour schemes. Here's our first impressions of the Samsung Galaxy Note10 and Galaxy Note10+.

On the storage front, the Galaxy Note10 comes with 8GB RAM and 256GB storage, whereas the Galaxy Note10+ has 12GB RAM + 256GB or 512GB of internal storage along with a slot for microSD card. Both smartphones run Android 9.0 (Pie). The younger sibling packs a 3,500mAh battery while the Note10+ comes with 4,300mAh battery with up to 45W fast wired charging. Both of them have wireless (WPC and PMA) charging, and Wireless PowerShare 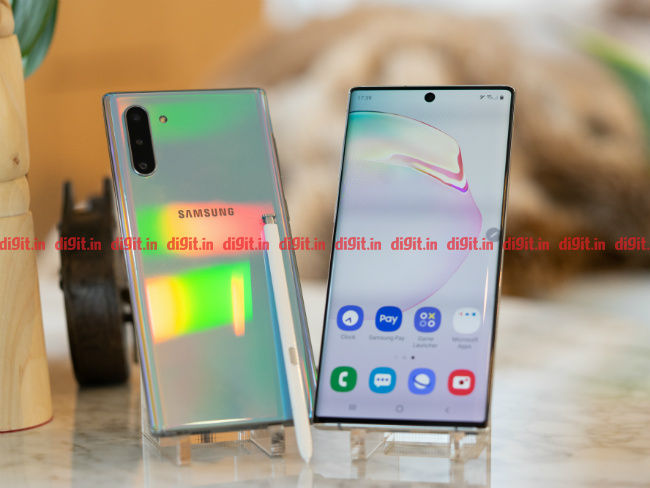 Talking about other similarities, both the smartphones have stereo speakers and earphones tuned by AKG, surround sound with Dolby Atmos technology,and a USB Type-C port. On the connectivity front, they have dual 4G VoLTE / 5G (Note10+), Wi-Fi 802.11ax (2.4/5GHz), VHT80 MU-MIMO,1024QAM, Bluetooth 5, GPS with GLONASS, and NFC. Also, both the smartphones sport a water and dust resistant body rated IP68.