It is seen featuring Snapdragon 675 SoC and 6GB RAM.

Samsung upped its game by launching three M-Series phones, the Galaxy M10, Galaxy M20 and the Galaxy M30 in India. Rumours making rounds on the internet suggest that the South Korean company is already working on the next device in the series, the Galaxy M40. Incidentally, the phone has been spotted on Geekbench website under the model name SM-M405F and reveals information about the internals of the phone.

The Geekbench listing shows the device with a Snapdragon 675 chipset, coupled with 6GB of RAM. The phone scores 2361 in Single-Core and 6438 in Multi-Core benchmarking tests. The Snapdragon 675 can be seen as a major upgrade over the Exynos 7904 that powers both the Galaxy M20 and the Galaxy M30. A previous report had claimed that the phone could come with 128GB of onboard storage. 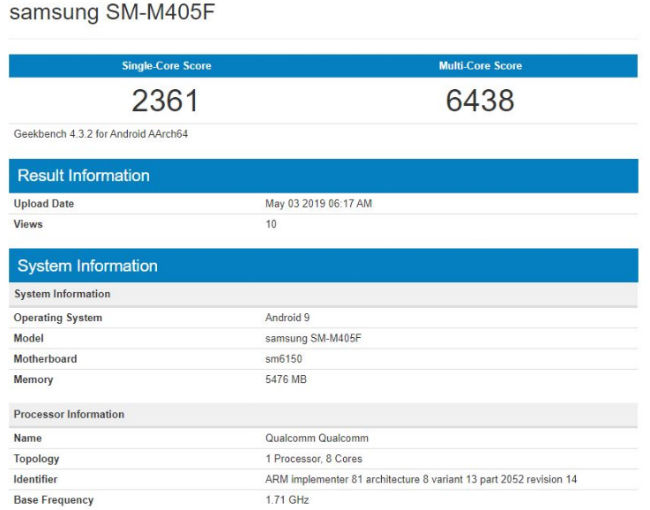 The Samsung Galaxy M40 has already been certified by the Wi-Fi Alliance and the certification revealed that the Galaxy M40 would be the first device in the series to come with Android Pie out of the box. There are reports which claim that the phone may offer a 5,000 mAh battery and a Super AMOLED display. The phone may have a triple-rear camera setup, and just like the previous three devices, it is speculated that the phone could launch in India first.

It’s already launched closest model, the Galaxy M30, is powered by the Exynos 7904 octa-core processor that is clocked at 1.8Ghz. The phone comes in two variants: one with 4GB RAM, coupled with 64GB of internal storage, and another with 6GB RAM with 128GB of onboard storage. The handset features a 6.4-inch Full HD+ Super AMOLED Infinity U display and is backed by a large 5000mAh battery.