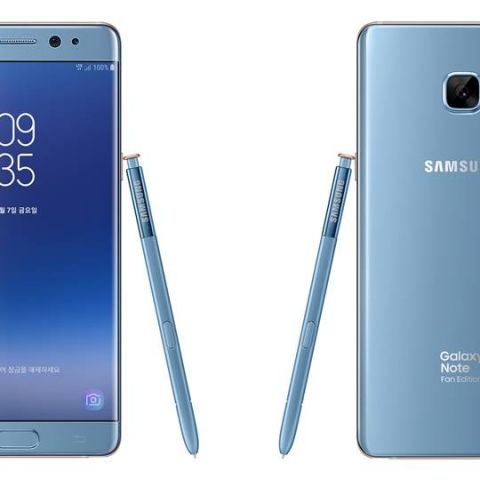 Earlier this month, Samsung launched a refurbished version of the Galaxy Note 7 called the Galaxy Note FE (Fan Edition). However, the device was only launched in South Korea with no information about it heading over to other markets. Now, a report by The Investor claims that Samsung may launch the phone globally later this month. According to the report, the company plans to limit the sales of the smartphone to 400,000 units in South Korea. The device is priced at 699,600 KRW (approx. Rs 39,000) and went on sale on July 7.

As mentioned before, the Galaxy Note FE is a refurbished version of the Galaxy Note 7 smartphone. As such, it shares much of its specifications with the ill fated smartphones. The device sports a 5.7-inch QHD AMOLED display and is powered by Samsung’s own Exynos 8890 SoC with 4GB of RAM. The phone sports a 12MP camera at the back, while at the front is a 5MP unit. The phone offers 64GB of storage.

Of course, the biggest and most important difference between the two device is the battery. The original Galaxy Note 7 sported a 3500mAh battery. This was later determined to be faulty and caused a number of explosions and fires. The would eventually lead to a recall and cancellation of the smartphone altogether. The new Samsung Galaxy Note FE sports a redesigned battery with a capacity of 3200mAh. The company noted that the new battery was tested using the same 8-point battery safety test that was used on batteries used by the Galaxy S8, and Galaxy S8+. This isn’t the only feature that the Note FE borrows from the new flagship smartphones. The device also comes with the company’s Bixby assistant already installed.