Samsung has been rather ambitious abut its smartphone roadmap this year, having launched as many phones this year as months. After announcing the Samsung Galaxy A80, and bringing it to market a little later than expected, rumuors around the next phone in the A-series have started to pick up. It would appear that the next product in the A-series will be the Samsung Galaxy A90 and will support 5G.

Twitter user @mmddj_ has tweeted official-looking slides that allegedly promote the Samsung Galaxy A90 5G. The image shows a white colour smartphone with a triple camera setup on the back aligned vertically to the left. This means that the rotating concept for the camera is not making a comeback no the A90 5G. 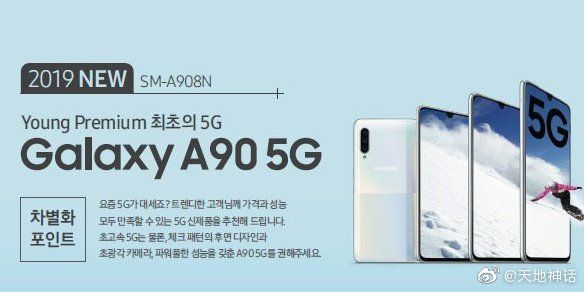 The Samsung Galaxy A90 5G is rumoured to be a 6.7-inch smartphone with an AMOLED display with FHD+ resolution. The primary camera on the back is expected to be a 48MP shooter, accompanied by an 8MPO ultra-wide camera and a third 5MP sensor which is likely to be for collecting depth information.

What is really interesting is that based on a Geekbench listing, the Samsung Galaxy A90 would be powered by the Qualcomm Snapdragon 855 chipset, making it the most powerful smartphone in the A-series. If this is indeed true, this would be the first Samsung smartphone to be sold globally with a flagship QUALCOMM SoC, given that Samsung’s flagship phones ship with Exynos in most countries around the world. Samsung could be going with the Snapdragon 855 chipset for the 5G radio compatibility.

As of now, there is no official word on when the Samsung Galaxy A90 would be making its way to the market.