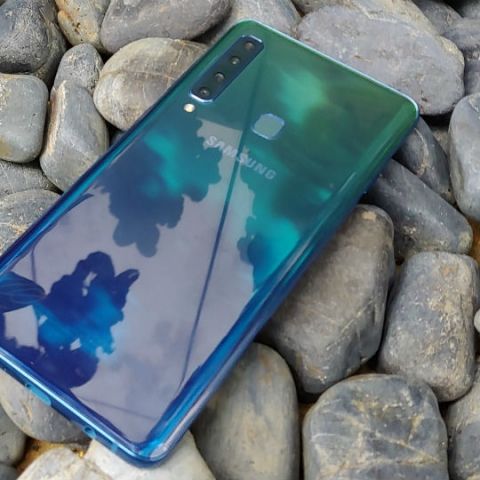 Samsung has launched its latest Samsung Galaxy A9 smartphone in an event in Kuala Lumpur. As rumoured, the new smartphone features four cameras on the back with varying lenses and it also sports an 18:9 display without a notch on top. The device features a rear mounted fingerprint sensor, supports face unlock and as the previously leaked image of the phone tipped, the four cameras on the back are vertically stacked. It is equipped with an ultra-wide lens, a telephoto camera, a main camera and a depth sensor.

The Samsung Galaxy A9 features a 6.3-inch Full HD+ AMOLED display, with an 18:9 aspect ratio and a 1080 x 2220p display. It is powered by the Snapdragon 660 octa-core processor where four of its cores are clocked at 2.2GHz and the rest are low-power cores running at 1.8GHz. Depending upon the region where it’s made available, it will be offered in 6GB and 8GB RAM models, coupled with 128GB of internal storage. The smartphone is equipped with a 3800mAh battery that also supports fast charging and it runs on Android 8.0 Oreo.

The Samsung Galaxy A9 features a 3D curved glass rear panel for “improved ergonomics.” In terms of optics, it sports a 24MP main camera with f/1.7 aperture lens and there is also an 8MP camera with a f/2.4, 120-degree ultra wide lens. Additionally, it features a 10MP sensor with a  f/2.4 telephoto camera with 2X optical zoom and there’s also a 5MP depth-sensing camera with f/2.2 aperture. There’s a 24MP camera on the front with f/2.0 aperture. The device’s main camera makes use of pixel binning technology to merge 4 pixels in one for capturing more details. There is also an “Intelligent Camera” scene optimiser for detecting from 19 different scenes and adjusting the settings accordingly. One will also be able to adjust the depth of field in an image after it’s captured.

Samsung didn’t reveal the pricing of the Galaxy A9 but it will be available in select regions from November in Caviar Black, Lemonade Blue and Bubblegum Pink colour options.