The images confirm that the Samsung Galaxy A8s will have a triple camera setup on the back and a punch-hole shooter in the front. 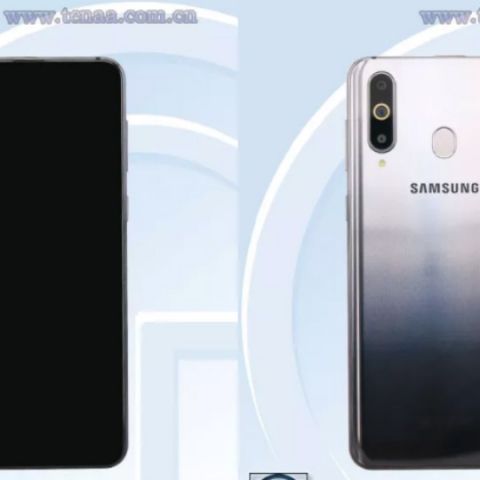 There have been a lot of rumours regarding Samsung’s Galaxy A8s smartphone. Leaks have suggested that it will be the first smartphone to have a punch-hole front facing camera. The latest listing on TENAA, the regulatory body that certifies phones before their release in China, has confirmed the design of the smartphone. The phone, that has a model number SM-G8870, is said to have a curved back panel, which features a gradient colour appeal.

Recently, the phone appeared on the US inspection agency FCC website. The FCC documents did not show the Galaxy A8s smartphone itself but a screenshot with the FCC certification. In the screenshot, you can notice that there is a white space in the upper left corner of the display besides the other notifications in the status bar. That is allegedly the place where the 'cut-out' for the camera is placed. The TENAA images are also seen with a selfie camera on the top left corner.

The punch hole camera design, called Infinity-O, is one of the four types of displays that the company had introduced at its annual developers conference. First was the “Infinity U” type notch which looks identical to the one that the Essential Phone had. It’s a small half oval that cuts down into the top middle of the display. The second is the “Infinity V” type notch which is quite similar to Infinity U type but with four edges instead of a curved half-oval. The third is the “Infinity O” type  and the fourth is the “New Infinity” display which looks to have a completely edge-to-edge design.