The Samsung Galaxy A70e shows up in leaked online renders

Surprisingly, it sports a microUSB port and not USB-C

It has three rear cameras and a single selfie camera

Samsung has been flooding the market with new smartphones since the start of the year across all price ranges. In the last two months, we’ve seen the introduction of the Galaxy A51, Galaxy A71, Galaxy S10 Lite, Galaxy Note10 Lite, and—more recently—Galaxy S20 series. Now, it appears this list is about to grow longer still. According to leaked renders found online on CompareRaja, Samsung could introduce a new Galaxy A-series model called Galaxy A70e. It is likely to be priced below the outgoing Galaxy A70 and Galaxy A70s models.

The leaked renders suggest that the Galaxy A70e—if that is indeed the final model name—is a mid-range model with a triple camera setup on the back panel. It is seen in black and white colours so far. In the images, the handset is seen sporting a rear-mounted square fingerprint scanner, a tiny waterdrop notch on top of the display for the single selfie camera, a 3.5mm audio jack, a single speaker grille, and surprisingly, a microUSB charging port. The dimensions of the Galaxy A70e are reportedly 156.8mm x 76.45mm x 9.35mm (WHD). The depth value takes the camera bump into account. 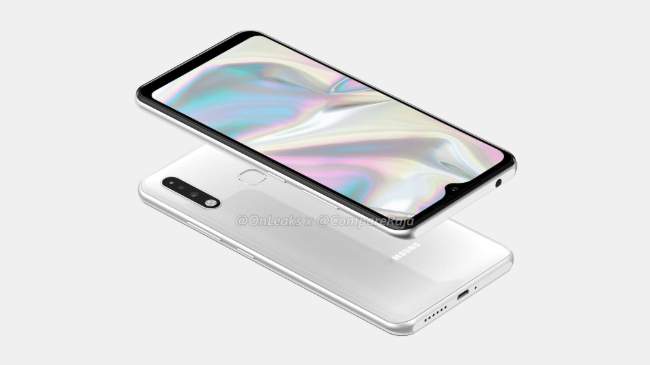 Galaxy A70e appears to have a microUSB port, not USB-C

Going by the renders, the Galaxy A70e comes with a 6.1-inch flat screen, which is significantly smaller than the 6.7-inch Super AMOLED unit on the Galaxy A70 and Galaxy A70s. Being a more affordable model, there’s a good chance the Galaxy A70e ditches the Super AMOLED panel for an LCD one. But we don’t know that for sure just yet. We’ve learnt nothing about the handset’s internals so far either. Since the renders aren’t official, we suggest you don’t hold your breath for the Galaxy A70e.

Samsung recently launched the Galaxy S20 flagship series, which consists of the  Galaxy S20 (priced at Rs 66,999), Galaxy S20+ (priced at Rs 73,999), and Galaxy S20 Ultra (priced at Rs 92,999). The Korean electronics manufacturer also launched at the same time the Galaxy Buds+ truly wireless earphones, which have a claimed battery life of 11 hours on a single charge. Samsung also announced the Galaxy Z Flip, an Android-powered flip-phone with foldable glass technology. You can read more about that here.