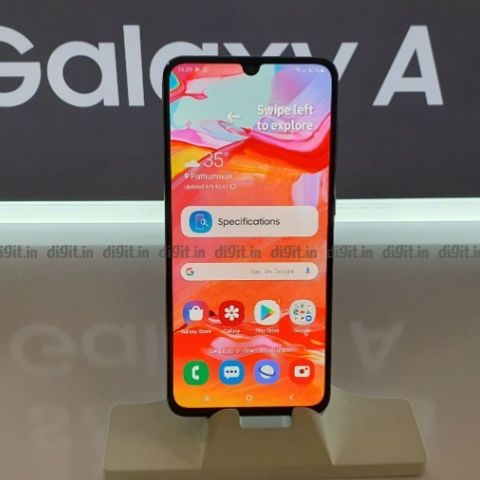 Those who pre-book the Galaxy A70 can purchase Samsung U Flex wireless earphones worth Rs 3,799 for Rs 999

Samsung is betting big in its A series to capture the mid-range market in India. The Galaxy A70 combines features from all other A-series phones released till now. Its USP is that it features a 32MP camera on both the front and the back.

The Galaxy A70 has a 6.7-inch FHD+ Super AMOLED Infinity-U display, same size as the Galaxy A80 and the Galaxy S10 5G, making it the largest display ever on a Samsung device. The display has a U-shaped notch on top and houses an ultrasonic fingerprint sensor within. The notch on the Galaxy A70 houses a 32MP selfie camera with f/2.0 aperture.

At the back, the Galaxy A70’s glass finish has a scattered light colour treatment, similar to the A80. The triple camera setup is arranged vertically on the back. The camera setup includes a 32MP lens with an f/1.7 aperture, along with an 8MP ultra wide-angle lens with 123-degree field of view, and a 5MP depth sensor. Samsung claims the image quality will be the same from both the front and the back cameras.

Under the hood, the Samsung Galaxy A70 is powered by the Snapdragon 675 platform and in India, only the 6GB RAM and 128GB storage variant has been announced. The storage on the Indian variant of the Galaxy A70 is expandable upto 512GB via a microSD card. The phone also has a 8GB RAM/128GB storage version, which Samsung could launch at a later date.

On the battery front, the Galaxy A70 runs on a 4500mAh battery with 25W Super-Fast Charging technology and a USB Type- C port. The phone also has a 3.5mm headphone jack. It runs on Android 9 Pie out of the box.

Starting May 1, the Samsung Galaxy A70 will be available for sale in three colours- White, Blue and Black across all retail stores, Samsung e-Shop and Samsung Opera House. It will also be available on Flipkart.

In our first impressions of the Galaxy A70, we noted that it is not as radically different from the Galaxy A80 and offers a viable middle ground to smartphone users who prefer the traditional form factor instead of the swivel on the A80, but with a high-resolution camera on both sides.