The Samsung Galaxy A7 (2018) comes equipped with a triple rear camera setup, a frst for Samsung. The phone features a 5MP depth sensor, a 24MP autofocus sensor and an 8MP ultra-wide sensor at the back. 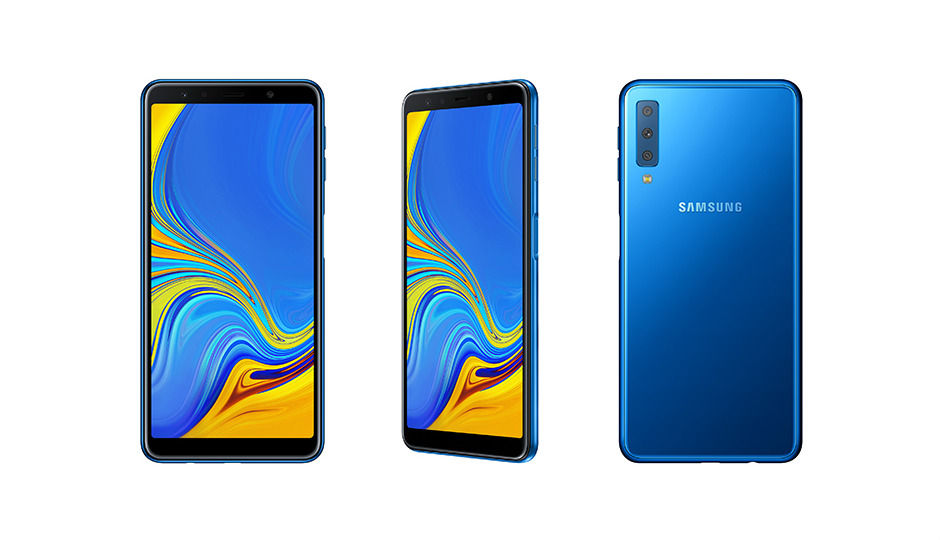 Following in the footsteps of Huawei, Samsung has launched the Samsung Galaxy A7 (2018), its first smartphone with a triple camera setup at the back. The company has not revealed complete specifications of the smartphone but its A7 series of devices aren’t your usual Galaxy ‘S’ or ‘Note’ series flagships. However, from the specs that the company has revealed, the handset packs a Super AMOLED display, a side mounted fingerprint sensor, Dolby Atmos sound support and more. Take a look.

In terms of specifications, the Samsung Galaxy A7 (2018) comes equipped with a 6-inch full-HD+Super AMOLED Infinity Display with a 1080x2280p resolution and an 18.5:9 display aspect ratio. The phone runs on an unnamed SoC, which is clocked at 2.2GHz and is coupled with up to 6GB RAM and 128GB of internal storage. The configuration can vary as per the market the device is launched in. The internal storage can also be expanded up to 512GB via a microSD card.

In terms of optics, the Galaxy A7 comes equipped with a triple camera setup with a 5MP depth sensor with fixed focus and f/2.2 aperture, a 24MP autofocus sensor with f/1.7 aperture and an 8MP ultra-wide sensor with f/2.4 aperture. On the front is a 24MP sensor with fixed focus, LED flash, a f/2.0 aperture, Selfie Focus, and Pro Lighting Mode options. The dual-SIM smartphone comes with Bluetooth v5.0, dual-band Wi-Fi 802.11ac, ANT+, NFC support in some regions with Samsung Pay support. It comes with a 3.5mm headphone jack and is backed by a 3300mAh battery.

“Samsung is committed to delivering meaningful innovation to all consumers across the Galaxy family, no matter who they are or where they are in the world” says DJ Koh, President and CEO of IT and Mobile Communications Division at Samsung Electronics. “That’s why we’re excited to introduce innovative new features to the A series with the Galaxy A7, a practical but powerful device that is built to help make your everyday both convenient and extraordinary.

Samsung Galaxy A7 (2018) price and availability

Samsung has not announced the pricing of the Galaxy A7 (2018) but it will be made available in select European and Asian countries starting this fall and will be soon made available for other regions later.