Samsung and Google yesterday unveiled Android 4.0 Ice Cream Sandwich, and the platform lead device for it â€“ the Galaxy Nexus (Nexus Prime has been dropped as a name). For now, no pricing details accompanied the announcement, and the phone will only be a 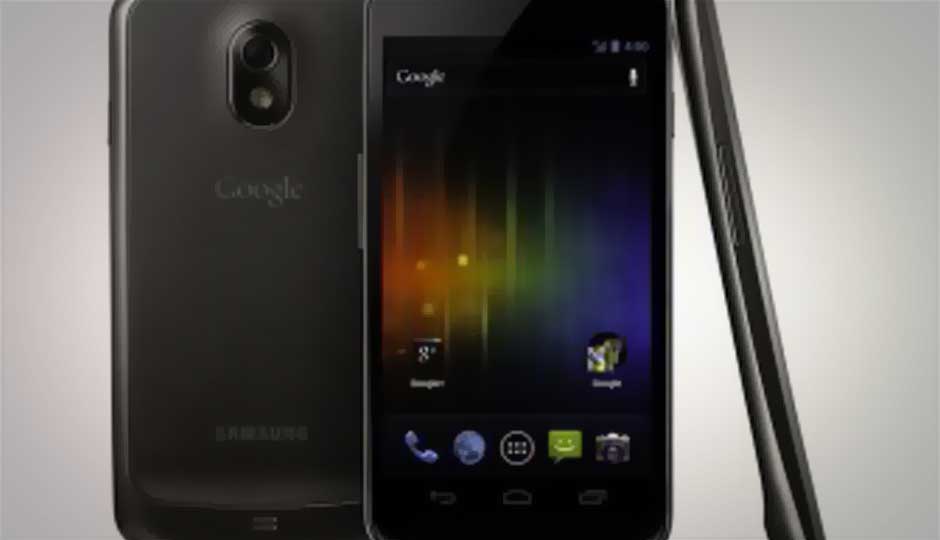 Samsung and Google yesterday unveiled Android 4.0 Ice Cream Sandwich (ICS), and the platform lead device for it – the Galaxy Nexus (Nexus Prime has been dropped as a name). For now, no pricing details accompanied the announcement, and the phone will only be available from November in Asia, Europe, and the U.S, and will grace shelves gradually in other territories across the globe. Details about when an ICS update will rollout for other Android devices have not been revealed either.

Samsung Galaxy Nexus
The Samsung Galaxy Nexus seems to have much the same specs as have been leaked over the past month, except for a more conservatively clocked dual-core processor – at 1.2GHz instead of 1.8GHz. The rest remain much the same: a massive 4.65-inch HD Super AMOLED display with a resolution of 1280x720 pixels, a 5MP rear autofocus camera with LED flash and 1080p HD video recording capability, a 1.3MP front-facing camera, 16GB or 32GB of inbuilt storage expandable via microSD, choice of HSPA or LTE connectivity, Wi-Fi 802.11 b/g/n connectivity, NFC connectivity, USB2.0 connectivity, a 3.5mm audio jack, a gyroscope, a barometer, and a 1,750 mAh battery to power it all.

With its 4.65-inch display, the Galaxy Nexus seems to be inhabiting the line between a tablet and smartphone, however, Samsung says it has managed to make the bezel small enough that users will still be able to fit the device comfortably in their pockets. So while the screen is wider, the device will apparently not feel much bigger than a 4-inch device. Also to be noted, is the slightly curved “contour” display of the Galaxy Nexus, just like the Nexus S had, ostensibly for better touch control. Check out the Nexus site for a walkthrough with the Galaxy Nexus.

New Features
Android 4.0 Ice Cream Sandwich brings numerous changes to the platform, but nothing outstandingly different from what we’ve seen in Honeycomb and Gingerbread so far. The biggest changes are probably the no further requirement for physical Android buttons (just virtual ones will do), a new Android default Google-developed font called Roboto, and a new swipe feature that allows users to shut down applications, or delete items, simply by dragging them off screen. Google is now also fully integrated, with Hangouts, Video Chats, and Messenger all easily accessible.

There are other new features as well. Ice Cream Sandwich, which supports NFC, will feature an application called Android Beam, which will allow users of two NFC-enabled ICS devices to share information, games , maps, web pages and YouTube videos simply by tapping each other. Users will also now be able to group applications into folders, by dragging them atop each other, just like iOS. Google has also added new screen capture option, allowing users to take a screenshot by holding the power and volume buttons at the same time.

Also new, is a new tool for monitoring data usage, which will also send notifications to the user, or block further data transfer after a certain threshold is reached. The user will also have more control of which applications can use data while running in the background. Voice typing has also made its way to the OS, allowing users to dictate text anywhere the keyboard is offered, by clicking the microphone on it. Last, but not least, is the new Face Unlock feature, which will allow users to unlock their phones by looking at it, rather than typing the code. Face Unlock however, like most recognition software, rarely works perfectly each time.

Updates
There are a lot of updates for native apps that have made their way to the platform, most noticeably the browser, which now allows for offline reading, up to 16 tabs, and the option to view the full web page, instead of the mobile version phones are commonly re-directed to. The 4.65-inch screen on the Galaxy Nexus deserves that surely, just like it has plenty of space for onscreen buttons, but with other, smaller devices, such new features might not be all that useful.

The calendar application now allows pinching and zooming for greater, lesser detail of the days, events. The lockscreen now supports user access to certain apps, similar to HTC Sense 3.0 UI. The new gallery app has a fresh layout, and can be sorted by location, and people. The new phone app allows users to listen to voicemail at different speeds. A new People app has made its way into Ice Cream Sandwich as well, quite similar to the Metro-style UI of WP7, with tiles of photos for each person, or contact. When tapped, each person tile displays all contact information, status updates, as well as details of connections with the user – such as LinkedIn, Facebook, and Twitter. The tiles can be added to the homescreen as well, for easier access.

Other updates include a new widgets tab, improved error correction for text entry, and a customizable launcher.