The Redmi CEO Liu Weibing has confirmed that the Redmi Note 7 Pro will be launched in China next week.

Xiaomi will launch the Redmi Note 7 in India on February 28. At the same event, the company is also expected to announce the Redmi Note 7 Pro(₹ 13980 at amazon) and the Redmi Go smartphones. Ahead of the India launch, Redmi President, Liu Weibing has confirmed that the Redmi Note 7 Pro will debut in China next week. The news comes via Weibing’s Weibo post, which is accompanied by an image of the upcoming phone. The Redmi Note 7 Pro, unsurprisingly, looks similar to the Redmi Note 7 but as we already know, it will come equipped with the 48MP Sony IMX586 sensor instead of the Samsung GM1 sensor. 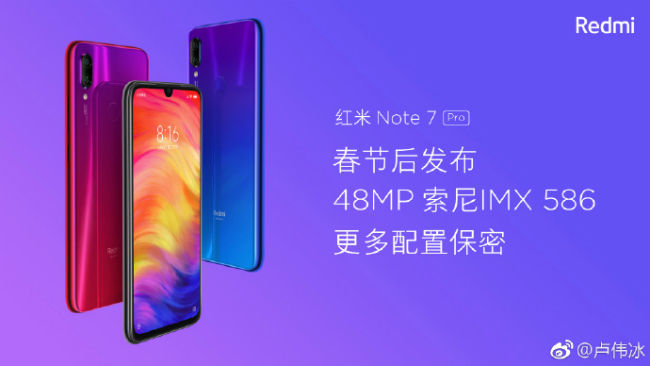 Weibing had previously suggested that the Redmi Note 7 Pro could be made official after the Mi 9, which launched on February 20. It looks like the company is ready to deliver on its promise. Speaking of the Mi 9, the company announced the phone alongside the Mi 9 Transparent Edition and the Mi 9 SE.

Xiaomi Mi 9 is powered by the Snapdragon 855 SoC, coupled with up to 8GB RAM and 128GB of internal storage. It features a 6.39-inch full-HD+ Samsung AMOLED display with Corning Gorilla Glass 6 protection and sports a waterdrop notch design. In terms of optics, the Mi 9 is equipped with a triple camera setup with a 48MP primary sensor with f/2.2 lens, a 16MP secondary sensor and a 12MP tertiary sensor. On the front, it comes with a 20MP camera.