The Redmi 7 and the Realme C2 offer similar specs but the former comes with a fingerprint sensor. 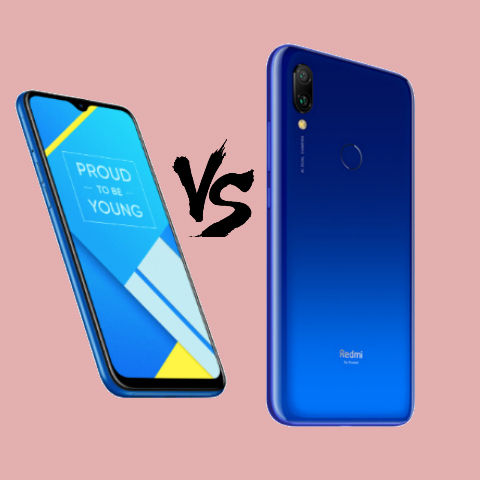 In a gap of two days earlier this week, the Indian entry-level smartphone market saw the launch of two phones from two of the top 5 phone brands, Realme and Xiaomi’s sub-brand Redmi. On April 22, Realme launched the ‘Realme C2(₹ 6398 at Tatacliq)’ phone, and on April 24, Redmi unveiled its ‘Redmi 7.’ Both phones are aimed at the people who seek a feature-rich device which is light on the wallet. Digit will publish detailed reviews of both the devices in the coming weeks but till then, our detailed spec comparison below might help you with your ongoing research of buying a handset in this price segment. Note that while the Redmi 7 is the successor of the Redmi 6 that was launched last year, Realme C2 follows last year’s the Realme C1. 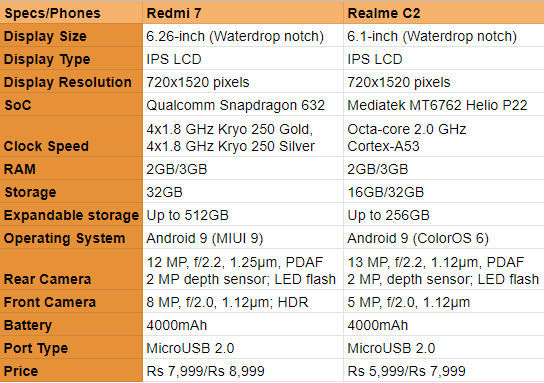 The camera has become a big selling point for smartphones today, and on those similar lines, both these phones carry a rear dual camera setup, and one selfie shooter. The Realme C2 ships with a 13MP primary sensor having a pixel size of 1.12um, a lens having an aperture of f/2.2. There is a 2MP secondary depth sensor, and an LED flash completes the camera module. On the front is a 5MP shooter with a 1.12um pixel size and a lens having f/2.0 aperture. Realme says that the rear camera can shoot slo-mo videos in 80fps/480p quality, and the front camera comes with AI Facial Unlock feature.

In comparison, the Redmi 7 comes with a 12MP primary sensor with 1.25um pixel size and f/2.9 aperture lens. There is a 2MP secondary depth sensor, and both camera setups come with AI capabilities. On the front is an 8MP camera, with a 1.12um pixel size and a lens with f/2.0 aperture.

It’s a tie. Both the phones carry a 4000mAh battery, and while Redmi 7 comes with an 18W charger in the box, Realme hasn’t revealed the details about the charger. Both of these phone also continue to retain the 3.5mm jack, and have microUSB 2.0 port for charging and transferring files. However, there is a significant difference in terms of options available for biometric authentication. Realme C2 does not offer a fingerprint sensor, while Redmi 7’s fingerprint sensor is situation on the back panel. In the colour options, the Realme C2 is offered in Diamond Blue and Diamond Black colours. And the Redmi 7 is available in Lunar Red, Eclipse Black and Comet Blue hues.