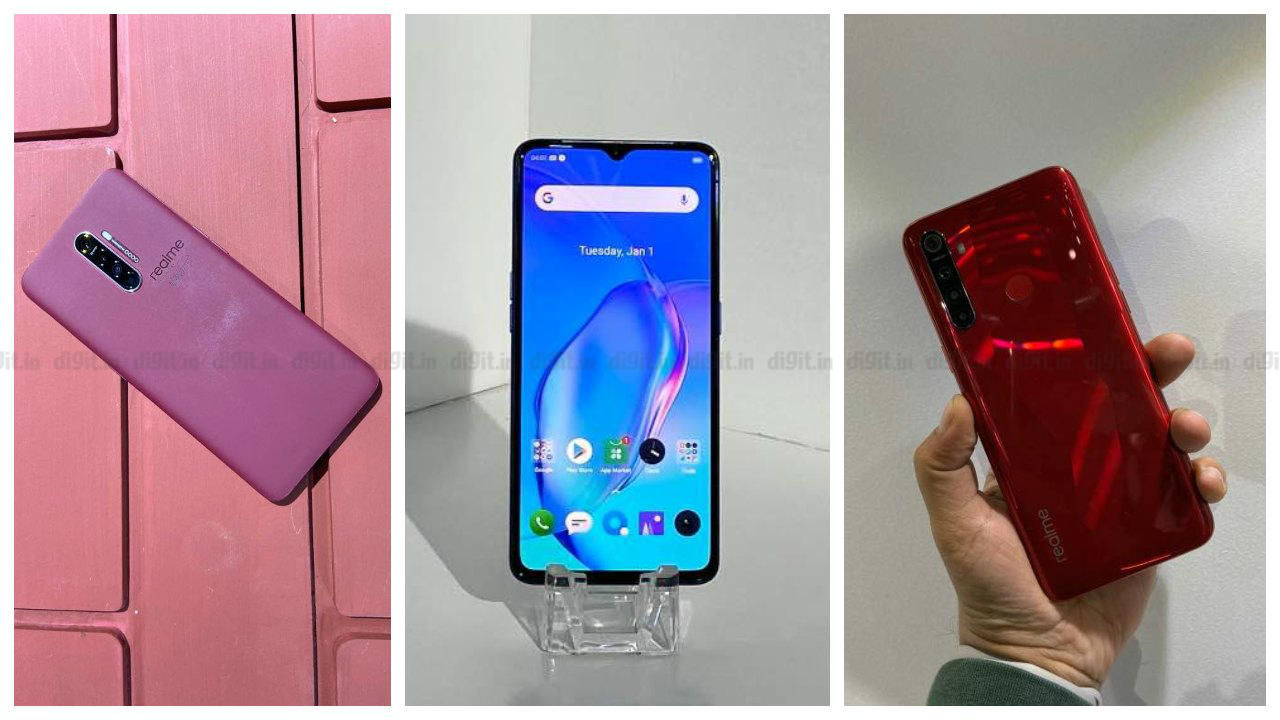 The Realme X2 Pro is a flagship handset that is powered by the Snapdragon 855+ SoC.

The Realme 5s is a mid-range device that runs on Snapdragon 665.

Realme has launched its latest flagship handset, the Realme X2 Pro, in India, along with a more-affordable mid-range smartphone, the Realme 5s. The Realme X2 Pro is already on sale in China and hence we knew almost everything about it. It comes equipped with flagship-level hardware like the Qualcomm Snapdragon 855+ SoC and offers up to 12GB RAM and 256GB of internal storage space. On the other hand, the Realme 5s is a mid-range handset that is powered by the Snapdragon 665 SoC, similar to the Realme 5, and comes equipped with a 48MP quad-camera setup, similar to the Realme 5 Pro. here’s everything you need to know about the two phones.

Smartphone manufacturers can sometimes change the specifications of their offerings while bringing them to India. However, this is not the case with the Realme X2 Pro as it comes with the same 6.5-inch Super AMOLED display that sports a 90Hz refresh rate and also supports HDR10+. As mentioned above, it runs on the Snapdragon 855+ SoC and will be available in 8GB and 12GB RAM variants, which are paired with 128GB and 256GB of UFS 3.0 internal storage. The device’s frame is built out of double-layered aluminium alloy frame and both, its rear and front, are protected by Gorilla Glass 5.

Coming to the optics, the Realme X2 Pro is equipped with a quad-camera setup on the back. It sports a 64MP main sensor that has an f/1.8 aperture. There’s also a 13MP telephoto camera, an 8MP ultra-wide sensor and a 2MP depth sensor. On the front is a 16MP  Sony IMX471 sensor that is paired with f/2.0 aperture lens. The handset comes equipped with an in-display fingerprint sensor and gets a 4000mAh battery that supports 50W SuperVOOC flash charging. The company claims that the device’s battery can be fully charged in less than 35 mins. There are also dual speakers on the handset, and it supports Dolby Atmos and Hi-Res Audio support.

Realme has also announced a Realme X2 Pro Master Edition, which will be available in Concrete and Red Brick colour variants. The 12GB + 256GB version of the handset will be available in the Master Edition series. The smartphone maker has also collaborated with DJI and as a result, the camera on the Realme X2 Pro can be controlled directly via Osmo Mobile 3’s buttons.

Ṭhe Realme 5s is powered by the Qualcomm Snapdragon 665 SoC and it is equipped with a 6.5-inch display that sports a 60Hz refresh rate and 1600 x 720p resolution. It comes in 4GB variant and with options to select from 64GB and 128GB of internal storage.

In the camera department, the Realme 5s comes equipped with a quad rear camera setup. It sports a 48MP main sensor that has an f/1.8 aperture lens with 6p lens and is supplemented by an 8MP wide-angle camera, a 2MP portrait lens and a 2MP dedicated macro lens. The handset is backed by a 5000mAh battery but sports a micro-USB charging port.

Coming to the Realme X2 Pro pricing, its 8GB RAM/128GB storage variant is priced at Rs 29,999. The 12GB RAM + 256GB storage version of the phone costs Rs 33,999. The handset will be available in Neptune Blue and Lunar White colour models.

Coming to the Realme X2 Pro Master Edition, the handset comes in only one variant with 12GB RAM and 256GB of internal storage. It will be available for Rs 34,999.

The 4GB + 64GB variant of the Realme 5s is priced at Rs 9,999, while its 4+ 128GB variant costs Rs 10,999. It will go on sale from November 29 at 12 PM via Flipkart, Realme.com and offline stores. It will be available in Crystal Red, Crystal Blue and Crystal Purple colour variants.

For launch offers, Realme is offering a no-cost EMI on the phone for up to six months. Additionally, Jio users can avail benefits worth Rs 7,000 with the handset.