There are reports that Realme could launch the Realme 3i smartphone along with the Realme X on July 15. Earlier this week, the company discreetly teased the phone on Flipkart, however, the listing did not delve information regarding the specs or features of the device. Now, a yet-to-be announced Realme smartphone with model number RMX1827 has surfaced on Geekbench revealing its specs. Reportedly, this device is a variant of the upcoming Realme 3i.

According to the Geekbench listing, the alleged Realme 3i will be powered by a MediaTek Helio P60 Chipset, along with 4GB of RAM. As far as the benchmarking scores are concerned, the phone has achieved 1,420 points in the single-core test and 5,070 points in the multi-core test on Geekbench. The phone is tipped to run Android 9 Pie out-of-the-box. 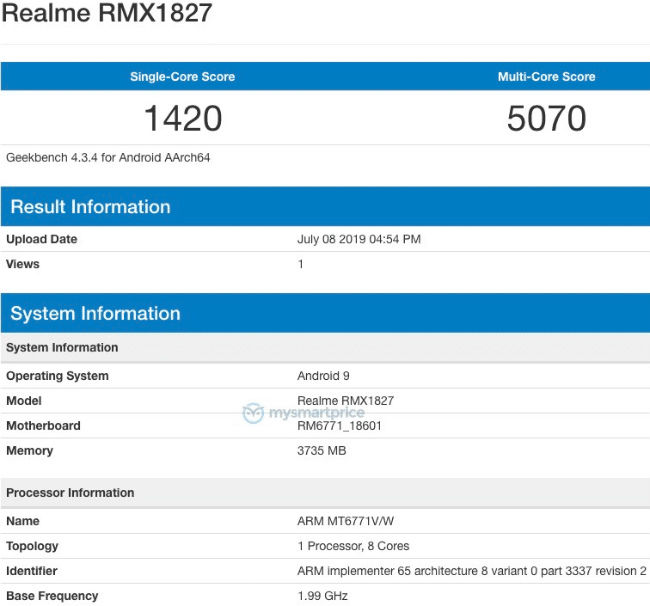 The Realme 3i could be a watered-down version of the Realme 3 that was launched earlier this year, and could be slotted between the Realme 3 and the Realme C2. Realme 3 was launched in March at a starting price of Rs 8999. It comes equipped with a 6.3-inch HD+ display with a 19:9 display aspect ratio and a dewdrop notch. The phone is powered by a 12nm MediaTek Helio P70 SoC.

The smartphone is backed by a 4230 mAh battery and is claimed to deliver up to 13.9 hours of continuous video playback. Realme has also integrated Content Adaptive Brightness Control (CABC) feature that is said to deliver up to 10 percent of battery optimisation. The handset runs on the new ColorOS 6 UI, which is based on Android 9 Pie. The new UI feature ‘Borderless design’ and introduces an app drawer.

In terms of optics, the Realme 3 comes equipped with a 13MP + 2MP dual rear camera setup. The 13MP main camera has a 5P lens with an f/1.8 aperture. The 2MP secondary sensor is accompanied by a lens with f/2.4 aperture. On the front, the smartphone features a 13MP sensor with an f/2.0 aperture lens. The phone’s camera supports PDAF and bokeh images, along with Hybrid HDR support. The company is also adding a Chroma Boost mode in its camera app that is touted to improve an image’s dynamic range and colours. There is also a Nightscape mode for enabling better low-light images.