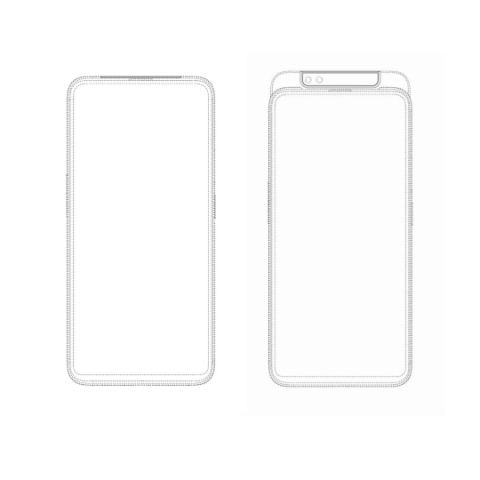 A new patent suggests that Oppo could be working on a new motorised pop-up camera design.

Oppo introduced the motorised camera mechanism with its Find X smartphone, which was innovative. Many other smartphone manufacturers soon followed suit to release their offerings with the same setup, to get rid of the notch and add a unique design element to their phones. However, a new patent granted to Oppo suggests that it might be working on another phone, which could sport a new design for the motorised camera setup. While both the front and rear cameras were hidden on the Oppo Find X, the patent suggests that the company might integrate a dual camera on the front this time and leave the rear cameras outside the motorised setup.

Images included in the patent hint that an upcoming phone by Oppo would be near bezel-less. There’s a tick mark shaped break in the phone’s rear panel, which would be seen where the motorised setup raises. Additionally, there’s nothing out of the ordinary with the phone’s design. However, there’s no fingerprint sensor on the back, which might mean that the handset could feature an in-display fingerprint sensor or solely work on face unlock. While a smartphone with this new motorised camera design might be a long way away from announcement, the company is all set to introduce its new Reno series of phones in the Chinese market.

Oppo Reno is confirmed to launch in two variants, one powered by the Qualcomm Snapdragon 855 and the other with the Snapdragon 710 SoC. A recently leaked benchmark listing suggests that the handset features a 6.4-inch AMOLED display with Full HD+ resolution of 1080 x 2340 pixels. Additionally, it is listed with 8GB RAM and 256GB internal storage. Some reports hint at a 5G variant of the phone, which could be possible with the addition of the Qualcomm X50 modem with the Snapdragon 855.