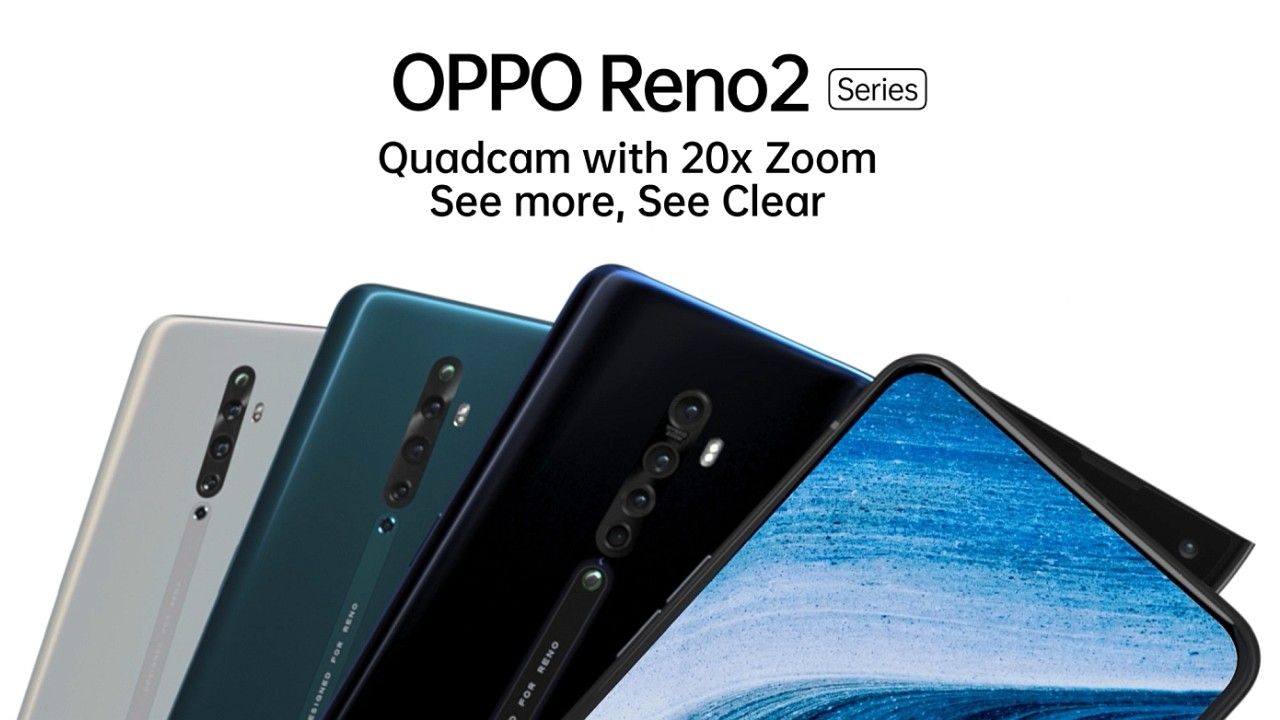 The Oppo Reno2 will continue to sport a shark-fin rising camera module.

The event will be livestreamed on YouTube, starting at 3pm.

The Oppo Renno2 is all set to be launched in India today. The smartphone will launch in India first, and then make its way to China. Oppo has teased the Reno2 many times running up to the launch. The company has even confirmed a few key specifications of the phone, including the chipset it will be sporting. Additionally, two more phones could launch alongside the Oppo Reno2, namely, the Oppo Reno 2Z and Oppo Reno 2F.

The launch event will begin at 3PM. It will be livestreamed on YouTube. You can watch the event here.

The Oppo Reno2  is expected to feature a  6.55-inch AMOLED Panoramic notch-less display under the protection of Gorilla Glass 6. It could have an aspect ratio of 20:9, and sport a 93.1 percent screen to body ratio. Oppo has confirmed that the Reno2 will be powered by the Snapdragon 730G chipset. It might have up to 8GB RAM and up to 256GB of internal storage. The smartphone is said to pack a 4,000mAh battery with VOOC Flash Charge 3.0 support.

While the Frame Boost 2.0 will allocate resources to avoid the consumption of too much power and heating of the phone, the Touch Boost 2.0 will assess touch events and accelerate response time accordingly.

The design is expected to remain the same as Oppo Reno. It is expected to have  3D curved glass back panel with Corning Gorilla Glass 5 protection. Oppo Reno2 will have the  shark-fin rising module with front camera housed in it.

On the optics front, Oppo Reno2 is touted to sport a quad rear camera setup: a 48MP primary camera, assisted by 13MP, 8MP, and 2MP sensors. The phone is confirmed to have 2x optical zoom, 5x hybrid zoom, 20x hybrid zoom. Oppo Reno2 is also expected to feature OIS and EIS for video stabilisation, ultra-steady video mode for up to 60fps frame rate, and support for recording 116-degree wide-angle videos. 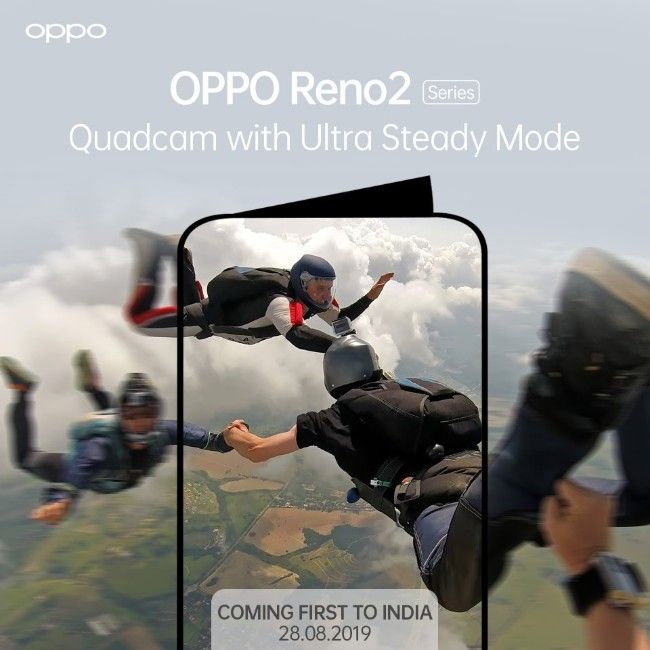 Previously, the Oppo Reno2 was reportedly spotted on  AnTuTu listing with model number PCKM00. It scored 259109 in the benchmark’s tests, which is slightly higher than the one we have seen on the Redmi K20 that is powered by the Snapdragon 730 and scores around 218,625 on the AnTuTu benchmark.

The smartphone will be available in Ocean Blue and Luminous Black colours.

Oppo Reno2Z is expected to launch alongside the Oppo Reno2. It will reportedly feature a 6.53-inch full-HD+ (1,080 x 2,340 pixels) display with Gorilla Glass 5 protection and 19.5:9 aspect ratio. The smartphone could be powered by the MediaTek Helio P90 SoC, paired with up to 8GB RAM. It could pack a 4,000mAh battery with support for VOOC 3.0 charging.

In the optics department, Oppo Reno2Z could have a quad rear camera setup: a 48MPIMX586 sensor, assisted by a 119-degree 8MP sensor, and a pair of 2MP sensors. It is expected to support 2x optical zoom, ultra-steady video mode for up to 60fps frame rate, EIS for stabilisation, “Ultra Night Mode” for low-light photography. However, the phone might miss on shark-fin rising module, and have a centrally aligned pop-up camera module instead.

Oppo is expected to announce a third Oppo Reno2 smartphone, which could be called Oppo Reno2F. It is expected to feature a 6.53-inch full-HD+ (1,080 x 2,340 pixels) display with 19.5:9 aspect ratio under Gorilla Glass 5 protection. It could be powered by the MediaTek Helio P70 chipset, paired with up to 8GB RAM. It is tipped to have 128GB of internal storage.

On the optics front, the Oppo Reno2F could sport a quad rear camera setup as well, with a 48MP Samsung GM1 sensor, accompanied by a wide-angle 8MP sensor and a couple of 2MP sensors. It could also have features like 10x digital zoom, and Ultra Night Mode 2.0 for low-light photography. However, Oppo Reno2F might miss out on EIS for video stabilisation.

Oppo has also posted on Weibo to confirm that new wireless noise-cancelling headphones will also be launched alongside the Oppo Reno2 smartphones.

There is no word on pricing yet.