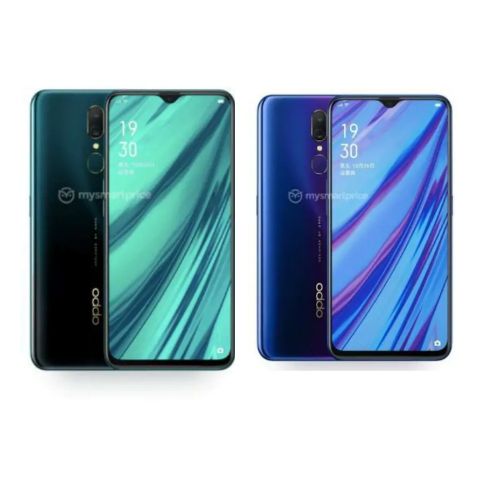 Oppo to reportedly launch A9 smartphone in China on April 30

The handset is touted to come equipped with a 48MP main sensor on the back.

The phone might be backed by a 4020mAh battery that is touted to support 20W VooC 3.0 fast charging.

Oppo seems to be working on a new handset that could soon be unveiled in China. A new leaked render of the Oppo A9 has been outed by MySmartPrice, along with some of its key specifications. The report suggests that it might be a mid-range handset that features a dewdrop notch design with a vertically aligned dual-rear camera setup and a rear-mounted fingerprint sensor. The smartphone is touted to launch on April 30 in China and some of its alleged highlights are a 48MP main camera sensor and a 4020 mAh battery with 20W VOOC 3.0 fast charging.

The report also suggests that the Oppo A9 could be introduced in a single variant with 6GB RAM and 128GB internal storage. While there is no confirmation of the equipped chipset, it is speculated to come equipped with a MediaTek Helio chipset. The supplemented images show the Oppo branding on the back, similar to the Oppo Reno and the device could be announced in three colour options of Ice Jade White, Mica Green, and Fluorite Purple. The phone is most likely to launch running on ColourOS 6.0, which could be based on Android 9 Pie. Additionally, it is touted to be priced at  CNY 1,700 (Rs 17,600 approx).

While more details about the upcoming phone are expected to surface as the launch nears, the company is readying for another smartphone launch in India. The company is teasing the launch of its OPPO F11 Pro Marvel's Avengers Limited Edition handset in the country. As the name suggests, the company is partnering with Marvel to bank on the popularity of the final Avengers movie. The Avengers Limited Edition of the phone is touted to be Blue coloured with a bright red Avengers logo on the back. The new limited edition handset of the phone is similar to the standard Oppo F11 Pro, but its internal storage is bumped up to 128GB, from 64GB.