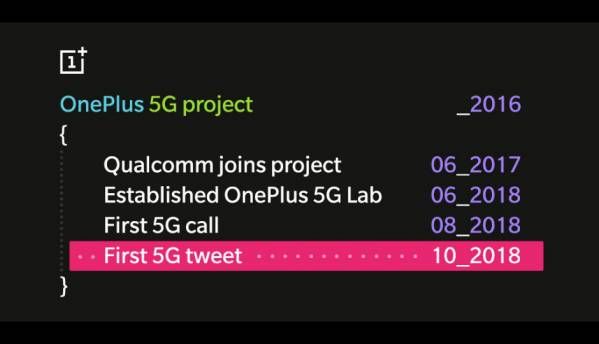 At a recent event hosted by Qualcomm, OnePlus co-founder Carl Pei confirmed that the BBK Electronics-owned company will be releasing a 5G phone next year. He also claimed it will be one of the first devices to have 5G capability, if not the first.  Now, Pete Lau tweeted a photo of OnePlus 5G project with the caption, “Say Hello to 5G”. In a detailed post on OnePlus forums, CEO Pete Lau delved deeper into the company’s 5G  project.

At the event, Carl Pei had mentioned OnePlus had conducted 5G tests in San Diego back in August. Lau built upon it and provided the results of the test. By the looks of it, the OnePlus 7 could very well support 5G networks. Qualcomm’s President Christian Ammon also said that the first batch of 5G-enabled devices will hit the market Q1 2019. Per a report by Engadget, Qualcomm also said most of the major OEMs including Xiaomi, Asus, LG., Motorola and more have committed to using the XR 50 5G chip.

OnePlus started testing 5G as far back as 2016 when it appointed a special project team to make a OnePlus phone with 5G capabilities. By 2017, Qualcomm’s R&D team also came onboard officially. And in August 2018, the 5G Project Team successfully established a 5G connection to Qualcomm’s lab in San Diego and made a 5G call and established an IP layer, in the United States. Lau hailed it as a big step forward in making a 5G phone. A modified Oppo R15 also underwent the same tests at Qualcomm’s labs back in August.

Using the discrete XR50 5G modem on a prototype device, the connection is based on 3GPP’s latest Non-Standalone 5G standard that will cover the first wave of 5G devices. It uses 10MHz of LTE bandwidth and 20MHz of 5G NR n78 band to successfully establish a connection.

Through screenshots and photos, Lau detailed the project. The prototype device that the company developed relied on a 5G Non-standalone network via a LTE b7+ n78 air interface. After the device was registered, the team managed to make a 5G data call and even made an IP layer work. Finally, after successfully establishing a 5G network, Lau said the team sent out a tweet using the ultra-fast network.

5G in smartphones is confirmed to arrive early next year. But support for 5G is one thing, and making use of it is more important. Presently, only a few states in the US have commercial 5G provided by Verizon, while South Korea is due to roll out commercial 5G in December. China too has allocated spectrum and is poised to roll out the next generation wireless standards that promises higher speeds and ultra-low latency.

In India, 5G spectrum will be auctioned sometime in 2019. Presently, only Reliance Jio has an all-IP network, hailed to be the world’s largest. At the Indian Mobile Congress 2018, Mukesh Ambani said he will need 40 days to roll out 5G on its network after the spectrum is made available.