OnePlus 9 camera details have been revealed as per the latest leak, giving us a look at the triple camera array on the back

OnePlus 9 could launch a month earlier than expected

The OnePlus 9 camera details have been revealed as per the latest leak, giving us a look at the triple camera array on the back. The OnePlus 9 series is set to debut around mid-March 2021 and is expected to be joined by a third phone, dubbed the OnePlus 9E. While a lot could change between now and the actual launch date, the rumour mill remains undeterred and is busy churning out leaks of the upcoming phones including some CAD renders and a pre-production unit.

According to a post by Rutwij Chavan on Slashleaks, the OnePlus 9 could use a 50MP primary camera with an f/1.9 aperture, a 20MP ultra-wide-angle camera with f/1.8 aperture and a 12MP telephoto camera with OIS support. This comes after another report surfaced online revealing that OnePlus may collaborate with Leica to optimize the cameras of the upcoming OnePlus 9 series. 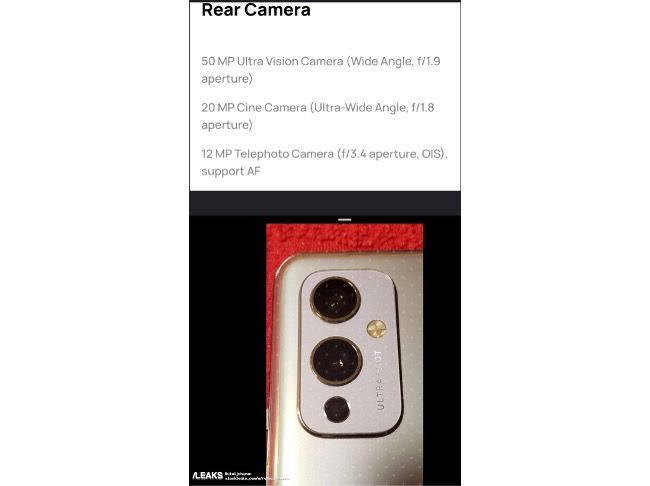 While the latest leak is in line as far as the three cameras go, a previous leak had indicated that the OnePlus 9 could use a 48MP primary camera along with a 48MP ultra-wide-angle camera and a macro or monochrome lens. This is not in line with the latest leak, so we will advise our readers to take either with a pinch of salt.

OnePlus 9 Pro has also been revealed in CAD renders by popular leakster OnLeaks. The phone is expected to feature a quad-camera setup with a curved screen. OnePlus 9E is rumoured to join the OnePlus 9 and 9 Pro and is likely a toned-down version that sits between OnePlus Nord and OnePlus 9.

The OnePlus 9 series is expected to be powered by the Qualcomm Snapdragon 888 processor and could support 65W fast charging that debuted with the OnePlus 8T. The OnePlus 9 Pro will likely have an IP68 certification, dual speakers and NFC.

The latest leak indicates that the OnePlus 9 could have a 50MP Ultra Vision primary camera with f/1.9 aperture, 20MP ultra-wide-angle Cine camera and a 12MP Telephoto Camera that supports OIS and autofocus.