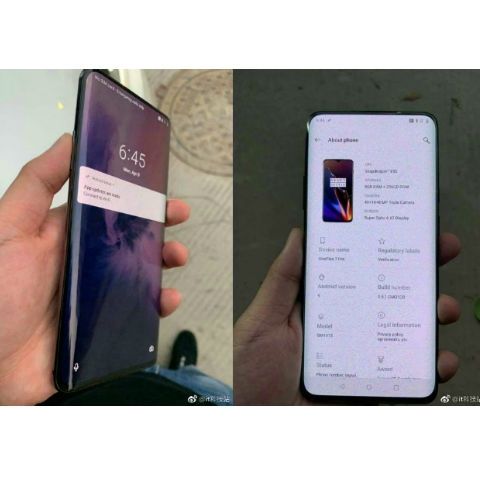 OnePlus 7 Pro pops up on Geekbench ahead of May 14 official launch.

The handset is listed running on the Snapdragon 855 SoC with 12GB RAM.

The smartphone is expected to launch in 6GB and 8GB RAM versions as well.

OnePlus is set to unveil its upcoming OnePlus 7 series of handsets on May 14, which is confirmed to consist of the OnePlus 7 and the OnePlus 7 Pro smartphones. The company has been teasing the phones from quite some time now, which are most likely to launch running on the latest Snapdragon 855 mobile platform. Ahead of the official reveal, the OnePlus 7 Pro with model number GM1911 has visited Geekbench. The benchmark listing reveals that the handset might come equipped with 12GB RAM and launch running on Android 9 Pie.

The OnePlus 7 Pro scores 3551 in Geekbench single core tests and 11012 in its multi-core tests. This is in-line with scores of other Snapdragon 855 phones like the Lenovo Z6 Pro and the Snapdragon 855 powered Samsung Galaxy S10. A previous report about the OnePlus 7 Pro suggests that it could launch in 6GB RAM/128GB storage version, an 8GB RAM/256GB storage variant and a 12GB RAM/256GB storage model. The OnePlus 7 was also leaked recently in a music video, where it is seen featuring a nearly bezel-less display design. However, this is contrary to the reports we’ve come across so far, which suggest that the OnePlus 7 will feature a waterdrop notch display, while the OnePlus 7 Pro will come equipped with a pop-up camera and a notch-free display. 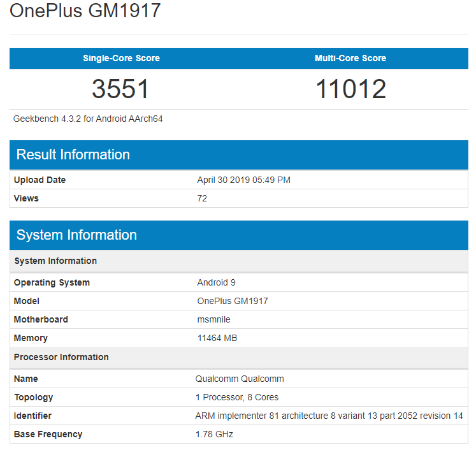 The OnePlus 7 is rumoured to come equipped with a 6.4-inch flat OLED display, while the OnePlus 7 Pro is said to feature a 6.7-inch curved Quad HD+ Super AMOLED display. The latter is also tipped to sport a 90Hz refresh rate for the display panel. As mentioned above, the two handsets are expected to be powered by the Snapdragon 855 chipset but the Pro variant is expected to come with the X50 modem for 5G connectivity.

In terms of optics, the OnePlus 7 Pro is confirmed to come equipped with a triple-rear camera setup. The company has confirmed that the device’s camera would offer 3X zoom. It is rumoured to sport a 48MP main camera with f/1.6 aperture and OIS support, an 8MP sensor that is paired with f/2.4 aperture telephoto lens with 3x zoom capability, and a 16MP wide-angle camera with 117 degrees field of view. On the other hand, the OnePlus 7 might ship with dual cameras that consist of a 48MP sensor with f/1.7 aperture and a 5MP secondary depth sensor.

The OnePlus 7 Pro variant might be backed by a 4000mAh battery that supports 30W Warp Charge, while the OnePlus 7 could be equipped with a 3700mAh battery with 20W fast charging support. Speaking of OnePlus’ Warp Charge, images of the official retail packaging was leaked online, which suggested that the company might launch the Bullets Wireless 2 IEMs and a Warp Charge 30 car charger. You can read more about this here.