It’s peak hype season for OnePlus as the company gears up to launch not one but two flagship phones in May — The OnePlus 7 Pro and the regular OnePlus 7. While we still await what exactly separates the two, OnePlus is being evidently clear that the OnePlus 7 Pro will come with a triple-camera setup. After teasing the rear camera stack by releasing the phone’s schematics via a newspaper ad, OnePlus posted three camera samples seemingly of the same scene, taken using three different lenses.

The three samples posted on Twitter have their EXIF data stripped, so we’re not sure of the camera configuration used to take the photos. But it’s clear from what can be seen that one photo is taken is with an ultra wide-angle lens, one with a regular wide-angle lens and another with a telephoto lens. OnePlus has already confirmed the OnePlus 7 Pro will come with 3X zoom. Also, the samples shared have the watermark “Shot on OnePlus Powered by Triple Camera”, further confirming the presence of three cameras on the back.

Samples shared on social media aren’t ideal for nitpicking as the compression algorithms usually eats away the details. It’ll require full-res samples and a colour-calibrated monitors to determine the photo quality of the upcoming flagship. However, this certainly looks impressive. We can only hope that the regular OnePlus 7’s camera won’t be drastically different. 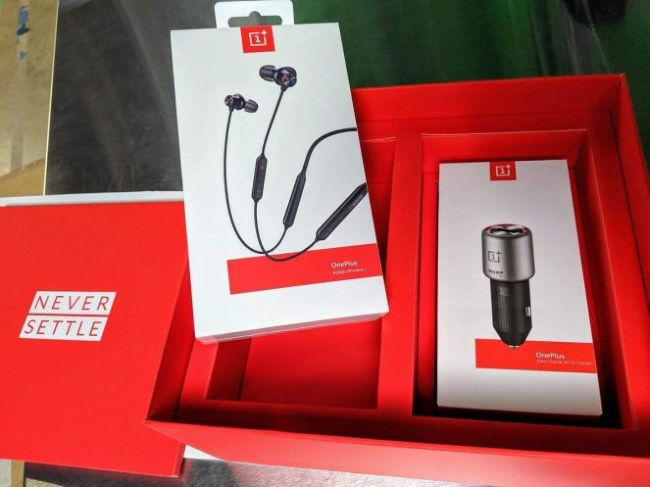 In other news, OnePlus 7 Pro’s official retail packaging has leaked giving a glimpse into some of the accessories OnePlus is planning to announce alongside the smartphones. They include the Bullets Wireless 2 and a Warp Charge 30 in-car charger, both of which can be seen included in the packaging.

The company introduced the first Bullets Wireless exactly a year back at the launch of the OnePlus 6, so it’s highly likely that OnePlus will follow it up with a successor. So far, nothing other than the retail box of the headset have come out. More interestingly, the Warp 30 car charger will be highly welcome by the device owners and with 30W fast charging, it could very well become the fastest car charger available.

The packaging was leaked via a tweet from Linus Tech Tips which was later deleted. However, fans were quick to share it further. Tipset Ishan Agarwal also tweeted the outer packaging of the devices. However, except for the “Go Beyond Speed” strapline, nothing else can be seen.

We’re likely to get more details about the upcoming flagship devices from OnePlus as the launch date inches closer. The OnePlus 7 and the OnePlus 7 Pro will be announced on May 14 in a simultaneous launch event in Bengaluru, New York and London.