Just three days after the company pulled the covers off the OnePlus 7 Pro, the flagship got its first OTA update bringing one of the rare smartphone features to the phone. Called DC dimming, the feature is a first for OnePlus phones. Along with the DC dimming, the 125MB update also brings Google’s April security patch, improvements to the camera, and some features to the Gaming (Fnatic) mode.

As mentioned, the OxygenOS 9.5.3.GM21AA update brings the DC Dimming feature. OnePlus had already announced that OnePlus 7 would have this display-related technology. With the increasing use of the OLED panels in the smartphone industry, DC Dimming feature has gained a lot traction, and OnePlus is one of the early adopters. In layman’s terms, DC dimming feature automatically adjusts (dims and brings up) the brightness of the phone’s display according to the ambient environment. 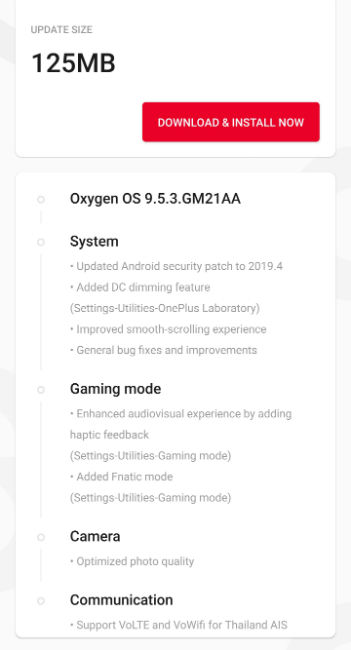 Now almost every phone has this “adjustment feature” in them but it is NOT DC Dimming. The feature is a more effective way of controlling the light output of an LED fixture. It uses DC current to control the output, that is, if the voltage goes up, the display will emit more light and vice-versa. DC dimming is one of the most effective way to reduce the low-brightness strobe. Users can access the DC dimming feature by going to Settings > Utilities > OnePlus Laboratory. The update also brings improvements to the camera, and the update also brought support for VoLTE and VoWiFi for Thailand AIS.

Further, the changelog mentions enhancements in gaming mode. There is an enhanced audio-visual experience by adding haptic feedback. This can be accessed by going to Settings > Utilities > Gaming mode. The phone now has Fnatic mode, which is basically a gaming mode designed to users enhanced gaming experience by bringing and using all available resources to run a game on the phone. It also minimises interference from other apps by blocking their network access, and activating the Advanced DND feature that blocks all calls and notifications. This can be accessed by opening Settings > Utilities > Gaming mode.