After almost a month of teasers and reports, the OnePlus 7 series of handsets is finally official. As confirmed earlier, the new series consists of the OnePlus 7 and the OnePlus 7 Pro, with the Pro being the more feature-packed variant. As previous rumours and reports suggested, the OnePlus 7 Pro comes equipped with a ‘Fluid’ AMOLED display and it is the first OnePlus device to get a QHD+ resolution panel with the 90Hz refresh rate. It also sports a pop-up front camera and a 48MP sensor on the back. As for the OnePlus 7, the company carried over the design of the OnePlus 6T and threw in latest Snapdragon 855 SoC.

The OnePlus 7 Pro features a metal build, which is sandwiched by an all-glass design. Both the front and rear panels are protected by Gorilla Glass 6 and 5 respectively. As mentioned above, the smartphone comes equipped with a 6.67-inch fluid AMOLED display with a QHD+ resolution. The display is rated A+ by DisplayMate, sports pixel density of 516 ppi, is HDR10+ certified and has a 90 Hz refresh rate. The higher refresh rate should make animations, navigation and supported video playback smoother. However, there aren’t really any games that can currently benefit from it. There’s also Night Mode 2.0, which is touted to lower screen brightness to 0.27 nits for less eye strain at night. 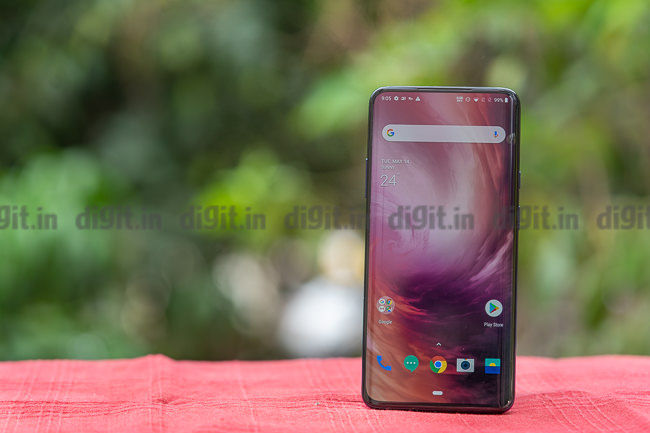 As expected, the OnePlus 7 Pro is powered by the Snapdragon 855 SoC and comes with up to 12GB RAM and 256GB of storage. OnePlus 7 Pro is the first phone to be available with the latest Qualcomm chip since there aren’t any other phones powered by it. As we noted in our performance comparison test results, the OnePlus 7 Pro is ahead of its closest competitors in most of the tests by a slight margin. Even in Gamebench tests, the smartphone managed to maintain the lead over Honor View 20, Huawei P30 Pro and the Galaxy S10E. You can read our performance review of the phone here.

Coming to the optics, the OnePlus 7 Pro sports a triple rear camera setup that is said to cover the focal range of 17mm to 78mm. The 48MP Sony IMX 586 sensor rests on the back and it’s paired with an f/1.6 aperture lens with a custom-made 7-element plastic lens. This main sensor supports OIS and EIS, and is supplemented by an 8MP telephoto lens that offers 3X zoom and also a 16MP ultra-wide lens. The 8MP sensor is paired with an f/2.4 aperture lens and gets OIS while the 16MP ultra-wide lens is coupled with an f/2.2 aperture lens with a 117-degree field of view. Read our camera review and comparison of the smartphone here.

There are also stereo speakers on the OnePlus 7 Pro, along with an improved in-display fingerprint sensor. The company says it worked closely with Dolby to tune the speakers on the phone. Backed by a 4000mAh battery, the handset supports Warp Charge 30 at 5V/6A that is said to deliver 38 percent faster charging speeds than the previous version. The improved charging tech is said to not be the cause of excess heat when charging the phone while gaming or recording videos. The phone also features improved haptic feedback, thanks to a new vibration motor and runs on OxygenOS 9 on top of Android 9 Pie. The OnePlus 7 doesn’t get the full-screen display design but gets the same waterdrop notch display as the OnePlus 6T. It features a 6.41-inch Full HD+ 60Hz Optic AMOLED display, which sports pixel density of 402 PPI and has an aspect ratio of 19.5:9. The phone is powered by Qualcomm Snapdragon 855 SoC and will be available in 6GB and 8GB LPDDR4X RAM, and 128GB/256GB UFS 3.0 storage. Just like the Pro variant, this OnePlus 7 also has dual stereo speakers.

The smartphone features dual rear cameras on the back with a 48MP Sony IMX586 main sensor with a lens having an aperture of f/1.7, and supports OIS, EIS and PDAF. The primary sensor comes with a 5MP secondary sensor, and the lens with this sensor has an aperture of f/2.4. The setup is assisted by a dual LED flash. On the front is a 16MP Sony IMX471 secondary sensor with the lens having an aperture of f/2.0. It is equipped with a 3,700mAh battery with fast charging support (5V/4A), and features an in-display fingerprint sensor.

Alongside the two OnePlus 7 phones, the company also announced the successor to its first-generation Bullets Wireless earphones. The new earbuds are, unsurprisingly, called Bullets Wireless 2 and are said to feature an upgraded triple driver structure. The new device comes equipped with two Knowles Armature Drivers, which is paried with one dynamic driver. Like its predecessor, the Bullets Wireless 2 also supports aptX HD, and run on Bluetooth 5.0. The Bullets Wireless 2 are priced at Rs 5,990 and the availability is yet to be announced.

The new OnePlus phones will be available via Amazon.in, oneplus.in, all OnePlus exclusive offline stores, all Reliance Digital outlets, MyJio stores and Croma outlets. The Mirror Gray and Nebula Blue versions of the OnePlus 7 Pro will go on sale from May 17 and May 28 respectively, while its Almond colour model, along with OnePlus 7 Mirror Gray and Red will go up for sale in June. The company has already announced pop-up stores where the OnePlus 7 Pro will be available. You can read more about it here.

Jio already announced the ‘Beyond Speed Offer' on the OnePlus 7 series of handsets so that users will be able avail benefits of up to Rs 9,300. This benefit is split in two parts. Users will receive an instant cashback of Rs 5,400 on the first prepaid recharge of Rs 299. The cashback will be credited in the form of 36 vouchers, each worth Rs 150, to the user’s MyJio account. One will be able to redeem these vouchers on subsequent recharges of Rs 299.

There are additional partner benefits worth Rs 3,900, which includes up to Rs 2,000 or 20 percent off, whichever is lower, on Zoomcar bookings. Users will also get Rs 1,550 off on flight tickets and Hotel Bookings on EaseMyTrip as well as 15 percent off on bus-bookings. If users spend a minimum of Rs 1699 on Chumbak, they will get Rs 350 off. The offer can be redeemed from Jio's official website, Reliance Digital stores, Jio retailers or the MyJio app.

There's also a Rs 2,000 cashback when purchasing the phones using SBI debit and credit cards, along with an assured buyback value of 70 percent on exchange through Servify. Additionally, a no-cost EMI option of six months is also available on select channels.