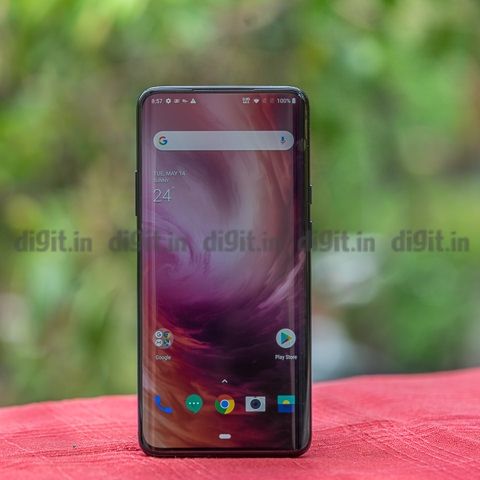 There was a long debate in our office when the OnePlus 6T had come out regarding where the phone fits. Is it a flagship? Or the flagship killer? The OnePlus 6T still had a few trade-offs, that some agreed kept it from being an out-and-out flagship, but the performance of the phone was right up there with the best, sometimes even beating them. Thankfully, there’s no debate in case of the new OnePlus 7 Pro. Having breached the Rs 50,000 mark in the Indian market, the latest offering from OnePlus is a thoroughbred premium flagship competing with the most expensive smartphones in almost every aspect, be it the display or the performance or the design.

The OnePlus 7 Pro, at least on paper, is the same premium flagship the company had once upon a time made a mission to mock and kill. The brand’s philosophy of sticking to speed remains, but along with it, OnePlus has also worked hard on offering premium design, display and camera. Save for an IP rating and wireless charging, there’s nothing really separating the OnePlus 7 Pro from the chaff of other premium offerings like the Galaxy S10+, Huawei P30 Pro and the iPhones. But that’s another day’s story to tell. Our focus today is to see whether the OnePlus 7 Pro remains true to its legacy. That of speed. It’s also the first Snapdragon 855-powered phone to land up in India and naturally, we have been itching to pit it against other premium smartphones that it will compete against.

The unit we received for review has 12GB of RAM and 256GB of storage. The RAM is overkill, frankly because there’s nothing in the world of Android that can come remotely close to using up 12GB of RAM. Regardless it’s a good point to boast about, and sometimes that’s really all you need a premium flagship for, isn’t it? The OnePlus 7 Pro is also joined by powerful rivals in that price-range. There’s the nice and compact Galaxy S10E that’s actually cheaper than some variants to buy. There’s the Honor View 20 that acts as a primer to the OnePlus 7 Pro with a different 7nm processor and a hi-res camera. Finally, we took the Huawei P30 Pro which has been topping our test charts for a while now to see how the first Snapdragon 855-powered flagship fares against these premium smartphones.

The OnePlus 7 Pro is clearly ahead in terms of RAM with 12GB at its disposal. Even the onboard flash storage is UFS 3.0 which is twice as fast as UFS 2.0 most of the other phones in this comparison come with. It’s not that the Galaxy S10E, Huawei P30 Pro, and the Honor View 20 are slouches by any means. But the OnePlus 7 Pro is expected to emulate the success the brand has had in the Indian market so far. OnePlus is considered the best-selling premium smartphone brand in India, after the success of the OnePlus 6 and the OnePlus 6T. Value for money was the major reason why the phones were popular, but now that the OnePlus 7 Pro has breached the Rs 50,000 mark, the perception towards the smartphone has now changed. It’s now being considered a premium smartphone. And not just the price, the OnePlus 7 Pro features a Netflix-certified 10-bit AMOLED display with 2K resolution and 90Hz refresh rate. It’s also HDR10+ certified and is rated A+ by DisplayMate. There’s a 48MP primary camera that’s paired with an 8MP telephoto lens that offers 3X zoom and also a 16MP ultrawide lens. With a refined OxygenOS making things even smoother, it’s a force to reckon with. Here’s how the first premium flagship performs against some of the best Android has to offer this year.

OnePlus is known for its speed and a primary driver of the speed is the CPU. The Snapdragon 855 is the latest Qualcomm flagship and the OnePlus 7 Pro proves it’s here to dominate. The AnTuTu score is one of the highest we have noted this year and beats all the phones in this comparison as well as the Galaxy S10+ which was so far the highest in our AnTuTu charts. The extra RAM and faster storage also could have helped in the high score, but it certainly sets the precedent for rest of the tests.

On Geekbench Single core CPU test, the OnePlus 7 Pro is beaten by the Samsung Galaxy S10E. The Exynos 9820-powered compact flagship has an advantage in single-core performance. The Kirin 980-powered flagship lags slightly behind. In the multi-core test, the OnePlus 7 Pro comes out on top with the Galaxy S10E breathing down on its neck. The Huawei P30 Pro and the Honor View20 are both around 500 points behind the two.

These synthetic numbers, so far, prove the performance of all the four phones are neck-to-neck. A few hundred points hardly make any difference in real-world usage. Or does it?

We corroborated these scores with Mobile Xprt 2015’s bench of real-world tests which includes making slideshows, performing encryption, adding photo effects and the likes. Lower the number, the better and the OnePlus 7 Pro prove to be faster in every test except for the first one — Photo effects. The rest of the phones are also pretty close to each other in finishing the tasks.

Finally, PCMark’s Work 2.0 gave us another insight into the ability of the phones to handle prolonged intensive workloads. Here, the OnePlus 7 Pro outperforms everyone by a good margin, proving just how much of a workhorse it is.

In the CPU performance comparison, the results are all quite close to each other, but the OnePlus 7 Pro is ahead in most of the tests, even if by a slight margin.

The GPU performance is just as crucial these days as the CPU. The GPU aids in most multimedia-centric tasks like 3D rendering of games and apps, especially in rendering pixels, textures and shades. The OnePlus 7 Pro introduces the Adreno 640 to the market, the most advanced GPU made by Qualcomm for smartphones, while the Galaxy S10E brings the Mali G76-MP12 and the Huawei and Honor phones offer the Mali G76-MP10. Here’s how they perform on synthetic benchmarks —

On 3DMark Slingshot, the OnePlus 7 Pro blows away the competition. It’s ahead by a good 1500 points from the Galaxy S10E which comes second in the test. The Huawei P30 Pro and the Honor View 20 are undoubtedly good, but not as much as the OnePlus 7 Pro.

However, GFXBench results reverse the position. Here, the OnePlus 7 Pro, for some reason performed poorly. GFXBench measures the number of frames rendered by a device within a specific span of time. Here, the two Kirin 980-powered flagships are quite ahead of the Galaxy S10E and the OnePlus 7 Pro. We’re not sure why this discrepancy is coming in and it’s under investigation.

The result, in this case, is a mixed bag. Two different benchmarks gave two different results, so we’ll reserve the verdict on this for later.

The OnePlus 6T last year was one of the best Android smartphones for gaming, and the OnePlus 7 Pro is no different. We used Gamebench to record frame rates and stability for two popular Android games — PUBG Mobile and Asphalt 9. The games are highly graphics intensive and are usually a good indicator of performance. All the phones we have taken for this comparison deploy software optimisations to improve gaming. The Huawei P30 Pro and the Honor View 20 come with GPU Turbo 2.0 while the Galaxy S10E comes with its own gaming mode. The OnePlus 7 Pro also has a gaming mode that the company named after the popular eSports team Fnatic. Here’s how they fared.

The results show the OnePlus 7 Pro is an absolute beast when it comes to gaming. It managed to sustain the highest framerate PUBG Mobile can attain with 99 percent stability, even with the graphics set at high quality with HDR on. The Galaxy S10E comes second with 37 FPS and 91 percent stability while the other two are fairly consistent but at a lower 30 FPS.

On Asphalt 9, all the phones reached the max frame rate of 30 FPS save for the Galaxy S10E which managed 29 FPS. Again, all three phones save for the S10E was fairly consistent with over 95 percent stability. We will be testing the OnePlus 7 Pro with more games, especially the ones which can hit 60 FPS and above, considering this has a higher 90Hz refresh rate. One interesting thing we noticed while benchmarking ASphalt 9 was that on the OnePlus 7 Pro, Asphalt 9 does not show the "best graphics" options in the disp[lay settings. we will be exploring this further in our detailed review.

The winner in this test is the OnePlus 7 Pro, by a long margin.

That OnePlus 7 Pro will perform flawlessly is now expected. The company has made a name for itself for offering best-in-class performance. But what’s interesting to note in this comparison is while the OnePlus 7 Pro breached into the territory of premium flagships, the same premium flagships are dangerously close to beating the smartphone in pure performance. The OnePlus 6T was quite ahead of its premium peers last year, but in 2019, the gap is much lesser. Who knows by the end of this year, another smartphone might take the crown of the fastest smartphone.