A leaked image thought to be of the OnePlus 7 has surfaced alongside the existing OnePlus 6T. The image shows nothing but the front of the smartphones, comparing the 6T’s waterdrop notch display to the possible bezel less screen of the alleged OnePlus 7. 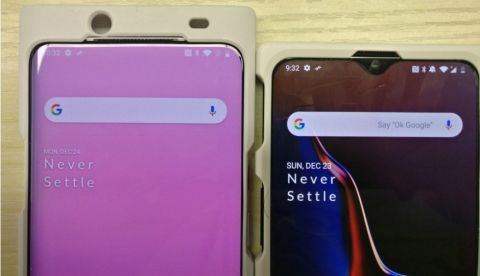 The OnePlus 6T’s 6-month life cycle will come to an end in March/April, which means it’s almost time for the OnePlus 7 to launch. We know that this year, OnePlus will be releasing a 5G device bearing the Snapdragon 855 chipset, but it is still unclear if that will be a part of the OnePlus 7 lineup or if it will be a separate series altogether. For now, not even the name of the next OnePlus flagship is confirmed, but a new leak that has surfaced on Slashleaks claims to show the upcoming OnePlus 7, alongside the OnePlus 6T.

In the leak, the OnePlus 7 and OnePlus 6T are placed front side up, side by side and the difference in the display design is starkly visible. The Alleged OnePlus 7 can be seen without any bezels or camera cutouts whatsoever. This leads to speculation that the OnePlus 7 will feature either a slide out mechanism to bring up the front camera setup (like the Mi Mix 3) or a pop-up setup similar to the Vivo Nex.

Further the leak shows that the OnePlus 7 has a red coloured alert slider on the right side of the display above the power button. This is similar to the positioning on the OnePlus 6T, lending more credibility to the leak.

Since the OnePlus 7 seen in the leaked image is in a case, it is not possible to tell how front camera mechanism will work, but the case itself features two cutout on top, possibly for the front camera setup to slide or pop out and fill the empty spaces.

Software on the phone has a typical Oxygen OS feel to it, but it is possibly the easiest thing to fake in a photograph. Remember, this is the first leak of the OnePlus 7 or what could be the next OnePlus flagship smartphone so do take it with a pinch of salt. However, given design trends on smartphones this year, we could very well be staring at the bezel less future of OnePlus devices.