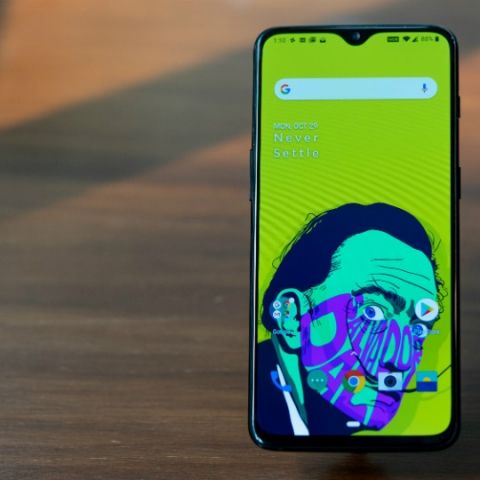 Weeks worth of teases, leaks and reports later, the OnePlus 6T is finally official. The company has announced the phone at its New York event and as expected, it comes with an in-display fingerprint sensor, the headphone jack is gone and the shape of the notch has changed as well. While the OnePlus 6 featured a rectangular notch, the OnePlus 6T gets a smaller waterdrop notch, which is similar to the one we have seen on the Oppo F9 Pro. Considering that BBK Electronics is the parent company of both the phones, this doesn’t come as much of a surprise.

The OnePlus 6T is equipped with a 6.41-inch Optic AMOLED 19.5:9 display with a 2340 x 1080p resolution, putting its pixel density at 402 PPI. The screen also gets the newer Corning Gorilla Glass 6 protection and OnePlus says that the new notch design has helped push the device’s screen-to-body ratio to 86 percent, up from 83.8 percent of the OnePlus 6. While the phone doesn’t feature a nearly bezel-less design, it is a step in the right direction as the ultimate goal for smartphone makers right now seems to be going completely bezel-less. OnePlus says that it has also improved the brightness levels, colour accuracy, and colour range of the display.

As expected, the OnePlus 6T is powered by the Qualcomm Snapdragon 845 SoC that can clock speeds of up to 2.8GHz and comes in two variants, one with 6GB RAM and 128GB of internal storage and another with 8GB RAM, coupled with 256GB of internal storage. It sports LPDDR4X RAM and UFS 2.1 2-Lane storage. As the leaked GeekBench and AnTuTu scores revealed, the phone is running on the latest OxygenOS, which is based on Android 9 Pie operating system. The new OS brings plenty of improvements and many new features to the phone such as updated Gaming Mode and Smart Boost that is said to improve app start up times by 5 to 20 percent.

In term of optics, the OnePlus 6T carries over the same camera configuration as its predecessor. On the rear is a 16MP + 20MP dual camera setup with Sony IMX 519 and Sony IMX 376K sensors respectively. The 16MP primary sensor gets a f/1.7 aperture with 1.22µm pixel size, while the secondary 20MP sensor also comes with a f/1.7 aperture with a pixel pitch of 1.0µm.

The rear camera also supports Optical Image Stabilisation (OIS), Electronic Image Stabilisation (EIS) and as AI is also used on the device, AIS. The phone’s main camera can shoot 4K video at 30/60 fps, Full HD video at 30/60 fps, 720P video at 30 fps and also Super Slow Motion videos at 1080p and 720p resolution at 240 fps and 480 fps respectively. Sadly, no super slow motion video recording at 980fps yet. The phone also gets a new Nightscape mode that the company says can help in capturing much better low-light images than its predecessor. There is also a newly developed Night HDR, especially for this purpose called Nightscape. The new feature will also be soon rolled out for OnePlus 6 but no exact date has been provided.

On the front of the phone is a 16MP Sony IMX 371 Sensor with f/2.0 aperture, EIS and a 1.0µm pixel size. The front sensor is placed in the tiny notch, which also houses a three-in-one ambient, distance and RGB sensor. Same as the OnePlus 6, one will be able to hide the notch from the phone’s settings. The whole package is backed by a 3700mAh battery, which is touted to deliver 23 percent of additional runtime.