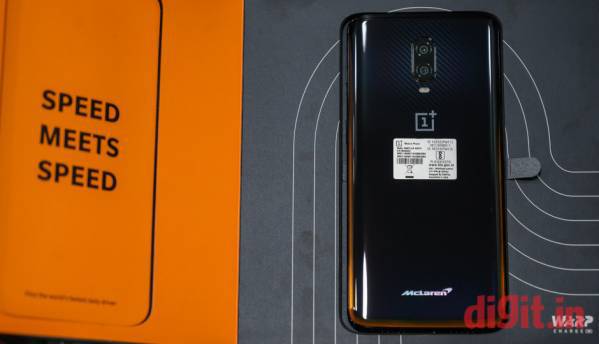 OnePlus announced its OnePlus 6T McLaren Edition smartphone globally on December 11 and it will be launched in India  today. While the device's internals are almost the same, it features some enhancements and additions over the regular OnePlus 6T. A notable design change is the signature McLaren Papaya Orange colour accent, which wraps around the phone’s bottom edge, fading into the black glass panel. Additionally, the pattern underneath the glass rear panel of the device is said to be based on McLaren’s carbon fiber, which has been used in the automotive company’s cars since 1981. There’s also 10GB RAM to go with the tagline of speed and the company’s partnership with McLaren.

OnePlus is hosting the launch event for the McLaren edition of the 6T in Mumbai and it is slated to commence at 6 p.m. IST. The company is expected to stream the event live via its social media channels but there’s no live stream link for it up yet. We will update this article with the link when OnePlus posts the live stream details.

OnePlus has also introduced Warp Charge 30 technology with the OnePlus 6T McLaren Edition. The new 30W charging tech is said to power the battery of the special edition handset enough to last an entire day in just 20 minutes. The company claims that the 3700mAh battery on the phone will be topped to 50 percent in 20 minutes. However, it remains to be seen whether or not the device actually lasts for an entire day under our tests. The phone also gets a new Papaya Orange braided charging/data cable. The phone will also include exclusive software animations, tuned to McLaren’s unique style and history.

In terms of hardware, the device gets the same internals as the standard OnePlus 6T. It sports a 6.41-inch full-HD+ AMOLED display with a 19.5:9 aspect ratio and runs on the octa-core Qualcomm Snapdragon 845 SoC. It features 10GB LPDDR4X RAM and 256GB of onboard storage. The device sports an in-display fingerprint sensor and OnePlus says that it can unlock the phone in 0.34 seconds and also gets faster over time.

The OnePlus 6T McLaren Edition will be launched in India later today, December 12. The company will announce its India price and availability at the launch event. One can already pre-register for the device on Amazon.in. In the UK, OnePlus has priced the McLaren edition for £649 (Rs 58,432 approx directly converted).