The OnePlus 6 has been spotted on HDFC Bank’s shopping portal, SmartBuy. As per the listing, the phone is priced at either Rs 36,999 or Rs 39,999. Clicking on the phone shows that the device is out of stock, but one can still view the specifications. However, its seems like the image as well as the listed specifications are all wrong.

As per the listing of the OnePlus 6 on the website, the phone is tipped to sport a 5.7-inch display with a resolution of 3200 x 1800 pixels. It is powered by a Snapdragon 845 SoC with 8GB of RAM and 128GB of storage. The listing also suggests that the phone will feature a single 23MP camera at the back, while at the front would be a dual-camera setup consisting of two 16MP sensors. The OnePlus 6 is also tipped to come with Android Oreo and sport a 3500mAh battery. The image further suggests that the phone may feature an under display fingerprint sensor. 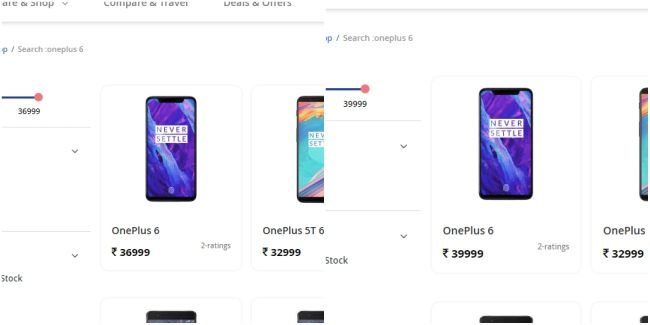 While the OnePlus 6 is listed as being powered by a Snapdragon 845 (something that the company has already confirmed), there are certain specs that seem to be wrong. First off, the size of the notch is a lot larger than the images of the phone OnePlus Co-Founder confirms notch display, 3.5mm audio jack on OnePlus 6 circulating on the internet. In fact, the size of the notch is closer to that of the iPhone X. Another thing to note is the resolution of the display. The phone is listed as having a screen size of 5.7-inches and a resolution of 3200 x 1800 pixels, which points towards a resolution of 16:9. However, the company switched to the 18:9 aspect ratio with the OnePlus 5T, which also offered a 6.01-inch screen size, and all leaks and rumours suggest that it would continue the same with the OnePlus 6. The camera listing also seems wrong. While the phone is listed as having a single rear camera and a dual-front cameras, rumours suggest that the opposite is true.

OnePlus is scheduled to globally unveil the OnePlus 6 on May 16, while the Indian launch is scheduled for May 17. The phone will be exclusively available via Amazon, and there will be a exclusive early sale access for Prime members at 12PM on May 21. Further, the company will also be holding Pop-up events around the globe as well as as eight cities in India. These include Bengaluru, Delhi, Mumbai, Pune, Chennai, Hyderabad, Kolkata and Ahmedabad. The event will take place between 3:30PM to 8MP on May 21 and between 11AM to 7PM on May 22. During these events, buyers will not only be able to buy the OnePlus 6, but also receive a bunch of goodies.