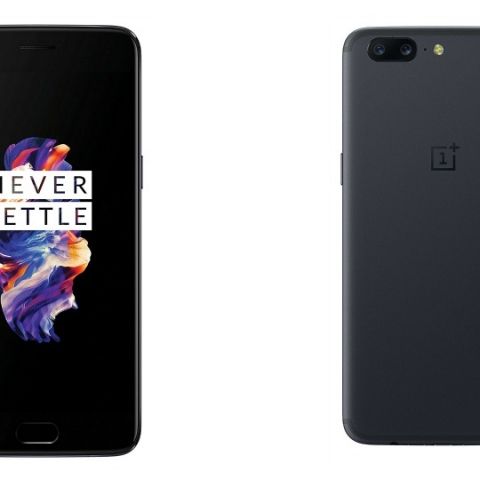 OnePlus has announced that the OnePlus 5 Slate Grey colour option will now be available in the 8GB RAM/128GB storage variant. Previously, the Slate Grey variant was available only for the 6GB RAM variant, while the 8GB variant was initially available in Midnight Black. The new device is priced at Rs 37,999, which is the same as the launch price of the device. The device will be available for sale on Amazon.in and oneplusstore.in. The company recently launched a new colour variant of the phone called Soft Gold.

The new colour variant of the phone will first be made available during the OnePlus Super Seller Week on Amazon, which will be held from August 21 to August 25. During the sale, customers will get offers on Cleartrip on the purchase of any OnePlus device. Further, OnePlus 5 customers can get Rs 2,000 off on exchange, no cost EMI, and Rs 1,500 refund in their Amazon Pay Account on the use of an American Express card or an Amazon Gift Card. OnePlus 3T customers can get extra Rs 2,000 off as the device is available for Rs 27,999 during the week, along with no cost EMI, Rs 2,000 off on exchange and Rs 1,500 refund in Amazon Pay on purchases made using American Express Credit Card or Amazon Gift Card.

The company also notes that those who purchase a OnePlus device from oneplusstore.in will get exclusive offers such as free OnePlus t-shirts and 50 percent off on flip covers with the purchase of the OnePlus 5, along with bundled Vodafone data and Amazon Prime credits. Users who purchase the OnePlus 3T can get a free protective case.