Nvidia has launched the much-awaited quad-core Tegra 3 chipset, codenamed Kal-El, destined to arrive in the Asus Eee Pad Transformer Prime later this month. According to the graphics giant, the Tegra 3 chipset is based on 40nm fabrication technology, and 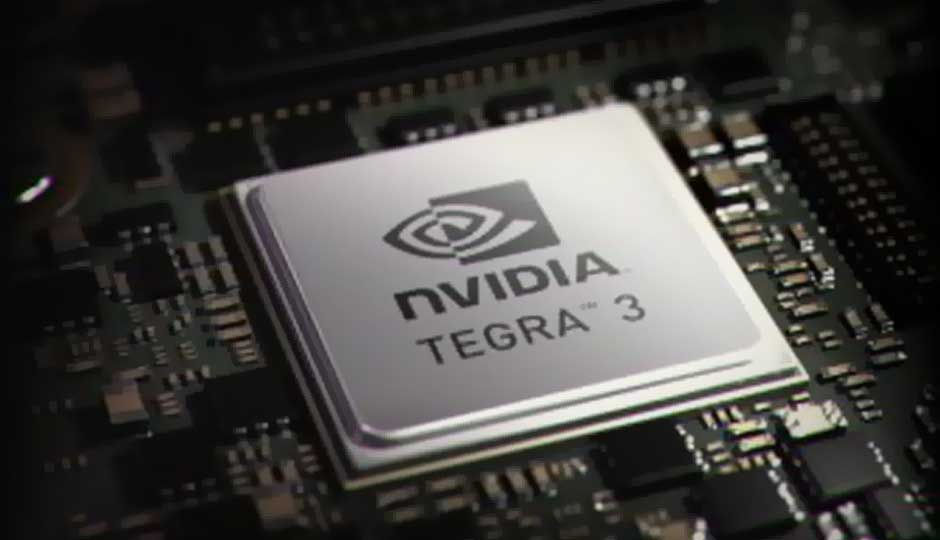 Nvidia has launched the much-awaited quad-core Tegra 3 chipset, codenamed Kal-El, destined to arrive in the Asus Eee Pad Transformer Prime later this month. According to the graphics giant, the Tegra 3 chipset is based on 40nm fabrication technology, and is expected to deliver five times the overall performance of the Tegra 2, and roughly three times the graphical performance, all while using about 40 percent of the Tegra 2’s power. While the Tegra 3 is meant primarily for the Android operating system, it also supports Windows 8 and Chrome OS.

The Tegra 3 will officially be the first ARM-based quad-core chipset to begin shipping, though others chip-makers, like Qualcomm, Texas Instruments, and ST-Ericsson are also expected to unveil quad-core ARM offerings by 2012. While called a quad-core, the Tegra 3 actually contains five general processing ARM Cortex A9 cores, with the lower-clocked 500MHz fifth ‘companion’ core taking care of most non-intensive tasks for the system, to save power. The other four processor cores can run at a maximum core clock of 1.4GHz (up from 1GHz of the Tegra 2), though if all the cores are active at once, that figure drops to 1.3GHz.

The resource allocation is apparently “OS transparent”, meaning the operating system will not have to be modified to support Nvidia’s Variable Symmetric Multiprocessing (vSMP) technology, which chooses which cores to activate. In low power mode, only the companion core will be running.

Check out a schematic of the die below (sized roughly at 80mm2), with the various components highlighted. 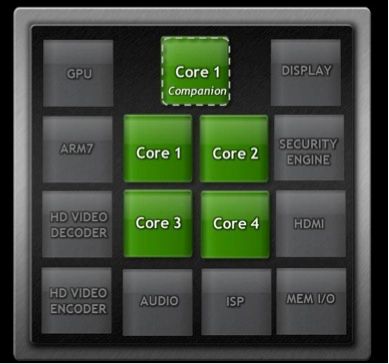 The Tegra 3 GeForce GPU features 8 pixel shader units, four vertex shader units, and 12 GPU cores, each with a larger cache than what the Tegra 2 had. For now, Nvidia has not confirmed the clock speed of the GPU cores, or how much higher it is than the Tegra 2’s 300MHz offering. The biggest graphical improvements with the Tegra 3 chipset include the ability to realistically render water simulations, smoke, blurs, damage, and lighting.

The new Tegra 3 also supports stereoscopic 3D, and, features expanded controller support for PS3, Xbox 360 and Wii controllers. According to Nvidia, the Tegra 3 also features an improved video decoder and encoder, which can accelerate 1080p H.264 content to up to 40Mbps, and encode 1080p video at 30fps. Also new, is the Image Signal Processor (ISP), which is supposedly twice as fast as the one on the Tegra 2.

Still featuring a 32-bit memory interface, the Tegra 3 supports higher-frequency memory however, up to LPDDR2-1066MHz and DDR3-L-1500MHz. The SATA II controller is now on die. Looking at the recently released roadmap, the Kal-El's successor, Kal-El is expected to be released by mid-2012, before Wayne or Tegra 4 hits shelves in 2013. For now, while Nvidia hasn't drastically improved per-core performance compared to the Tegra 3, subsequent iterations are expected to start doing so, starting with Wayne. In the meanwhile, the Tegra 3 will still pack a punch, according to AnandTech's Mr. Shimpi, "Tegra 3 attempts to increase performance by exploiting thread level parallelism in Android."

Stay tuned for more coverage of the Asus Eee Pad Transformer Prime. In the meanwhile, check out the video below, detailing some of the features of Tegra 3. For detailed coverage of the new chipset and GPU architecture, you could refer to AnandTech’s illuminating article.