The phone has five cameras on the back, as all the leaked renders of the phone had revealed. It’s how they are used that make the Nokia 9 PureView one of the most interesting phones to launch in a long-time. 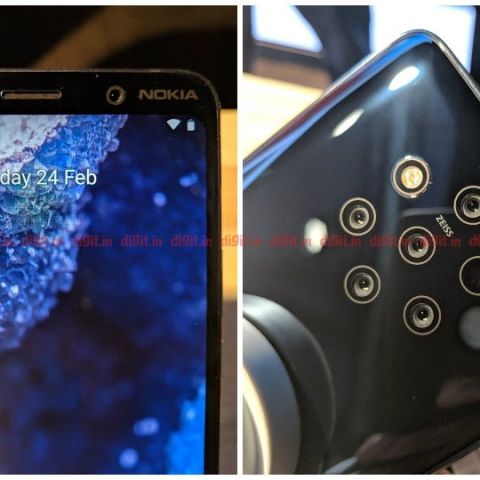 The Nokia PureView brand has returned and how! HMD Global has made it a mission to bring back all the things that put Nokia on the cutting edge of mobile technology back in the days. At its event on the sidelines of MWC 2019, Nokia announced the Nokia 9 Pureview. The phone has five cameras on the back, as all the leaked renders of the phone had revealed. It’s how they are used that make the Nokia 9 Pureview one of the most interesting phones to launch in a long-time.

The flagship Nokia phone has been under development for years and has something unique to offer for both professional and amateur photographers. Let’s talk about the phone first —

The Nokia 9 Pureview has a glass-sandwich body with a metal frame holding it all. It has the same diamond-cut finish as the Nokia 8 Sirocco and is rated IP67 for water and dust resistance. The Nokia 9 also becomes the latest flagship phone to buck the notch trend with a standard 18:9 display stretching 5.99-inches diagonally. It’s a P-OLED display with 2K resolution and is HDR10 certified. The screen is protected by Corning Gorilla Glass 5 on top.

There’s also an under-display fingerprint sensor and AI-based face unlock which are also running trends this year. Considering how long the phone has been under development, it’s little surprise that the phone is powered by the Qualcomm Snapdragon 845 coupled with 6GB RAM and 128GB storage. Nokia claimed the phone’s camera uses every aspect of the flagship mobile platform.

The Nokia 9 Pureview will available in only one colour — Midnight Blue.

The Nokia 9 Pureview has five cameras on the back. All have 12MP resolution and made by Sony. Three of the five cameras have monochrome sensors and the other two are RGB sensors. There’s also an additional ToF depth sensor for additional depth information. Finally, there’s a dual-tone LED flash to complete the setup.

All the five sensors have a fixed focal length of 28mm. Unlike other multi-camera phones that offers versatality with ultra-wide and telephoto sensors, the Nokia 9 fires all five cameras at once to capture the frame, generating a lot of data. Nokia claimed the cameras deliver a spectacular 12.4-stops of dynamic range which makes details from lights and shadows appear far more crisper.

The Nokia 9 captures a lot of light information to optimise RAW images. It even comes with Adobe Lightroom while Google Photos have been optimised to view DNG files. The camera also manages to capture 1200 layers of depth information, where most other smTartphones only capture 10 layers. This translates to more realistic bokeh in portrait shots. The depth information is stored in the photo and Google Photo is optimised to change the amount of blur in the shot.

There’s the Pro Camera app with full manual control and can understand when the phone is mounted on tripod or it’s hand-held. When in tripod mode, it can keep the shutter open for up to 10 seconds. The phone can record videos in 4K HDR at 30 FPS.

On the front, the Nokia 9 Pureview has a 20MP f/1.8 aperture camera. It supports 4-in-1 pixel binning and outputs photos in 5MP with less noise.

The phone comes with Android 9 Pie out of the box, but doesn’t get the breathing notification light or the dedicated Google Assistant button as the other 2019  Nokia phones. All of the tech in the Nokia 9 is powered by a 3320mAh battery. It supports fast charged with Quick Charge 3 and USB Power Delivery as well as 10W wireless charging. There’s no 3.5mm headphone jack, however.

The Nokia 9 Pureview will be a limited edition device. The company announced it will have  limited production and once stock runs out, Nokia might not replenish it. Nokia hasn’t announced how many units it will manufacture. But the phone has a very attractive price for the tech it offers. The Nokia 9 Pureview will retail for a global average price of $699 (roughly Rs 50,000).