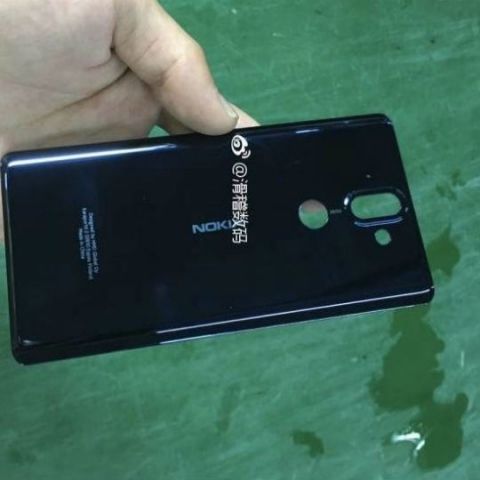 Nokia is tipped to launch another smartphone in the form of the Nokia 9 soon, and following the leak of CAD renders, the back panel of the phone has leaked on Baidu. The image was also posted by Suomimobiili and was in line with the leaked renders, with cut outs for the dual-camera module, flash and rear-mounted fingerprint sensor. There is also a Nokia logo down the center with a Zeiss logo between the dual-rear camera and fingerprint sensor.

Leaked renders by @OnLeaks and Compare Raja suggest that the phone may feature a dual-curved display, similar to what Samsung offers on its flagship phones. Further, it also hinted that Nokia may also join the likes of Apple, Google and Moto in ditching the traditional 3.5mm audio jack. The phone is tipped to feature a 5.5-inch AMOLED QHD display and may be powered by the Qualcomm Snapdragon 835 platform. It is expected to be available in two variants, one with 6GB of RAM and the other with 8GB of RAM. However, the phone was recently spotted on GFXBench and that variant offer 4GB of RAM. The listing also suggested that the phone would come with Android Oreo pre-installed.

HMD Global has said that it would update its current flagship smartphone, the Nokia 8, to Android Oreo by the end of this month. The smartphone was launched running Android Nougat v7.1.1. A recent report suggested that the company may skip the Nougat v7.1.2 update entirely and directly update to Android Oreo.

The Nokia 8 was launched in India last month and is available exclusively via Amazon at Rs 36,999. The phone sports a 5.3-inch QHD display and is powered by Qualcomm’s Snapdragon 835 chipset with 4GB of RAM. It is equipped with a 3080mAh battery and offer 64GB of onboard storage. At the back is a dual-rear camera setup with two 13MP cameras with Zeiss optics, one of which offers OIS. At the front is a 13MP camera. The phone also comes with a feature called Bothie, in which the front can rear cameras are used simultaneously to take a picture. For video recording, the phone comes with Nokia’s OZO audio enhancements for improved audio.