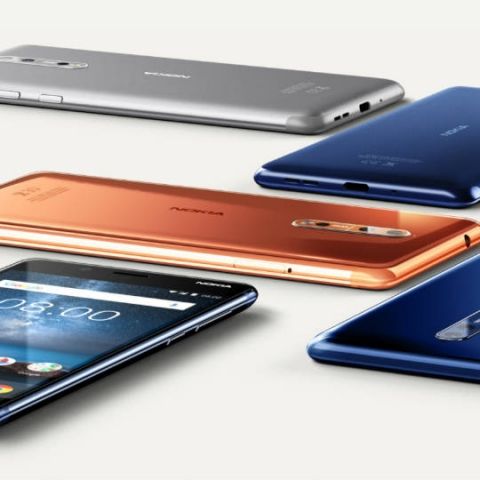 HMD Global is set to announce its flagship smartphone, the Nokia 8, in India today. The smartphone comes with flagship specifications and was initially said to be priced around Rs 40,000 to Rs 45,000. However, the Nokia 8 listing on Amazon India briefly revealed the price at Rs 36,999. The listing leads to a 'Notify Me' page upon clicking the link and reveals more details about the device.

While the product page on Amazon India could be just a placeholder, its listing can be considered as a credible source. It remains to be seen whether HMD Global announces the Nokia 8 at Rs 36,999, but at that price, it will emerge as a strong alternative to the OnePlus 5. The smartphone is expected to be available online exclusively on Amazon India and might also be made available via offline retail channels. 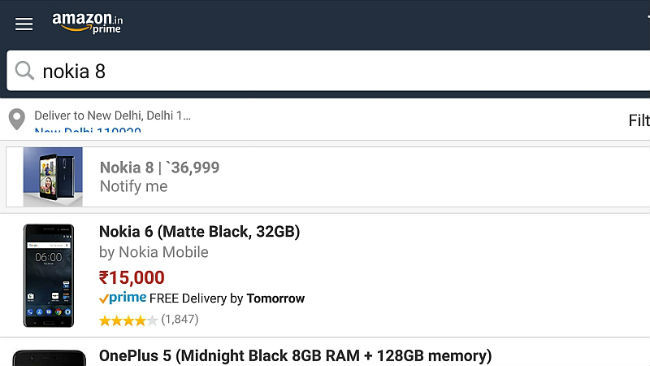 The Nokia 8 doesn't sport a bezel-less design, which is the strongest smartphone trend of the year. Instead, the Nokia 8 uses 6000 series aluminium for a premium metal unibody design. The smartphone features a 5.3-inch display with a Quad HD resolution of 2560 x 1440 pixels with Corning's Gorilla Glass 5 protection. The smartphone offers 4GB RAM and 64GB internal storage, further expandable up to 256GB via SD card slot.

Like the OnePlus 5 and Honor 8 Pro, the Nokia 8 also features a dual rear camera setup. It sports a dual 13MP rear cameras with one colour sensor and another monochrome sensor. The primary camera offers f/2.0 aperture, optical image stabilisation and uses Carl Zeiss optics. The handset also features a 13MP front camera with f/2.0 aperture and phase detection autofocus. The smartphone also comes with a new Bothie mode that uses both front and rear cameras simultaneously with dual-sight mode. HMD Global has also integrated the feature with Facebook Live and YouTube Live. Other camera enhancements include an option to record 4K videos with Nokia OZO 360-degree audio that uses three microphones and audio recording algorithm.

The Nokia 8 runs Android 7.1.1 Nougat, but the company has already started working on an Android 8.0 Oreo update. The smartphone is backed by a 3090mAh battery along with support for fast charging. The Nokia 8 is expected to retail in tempered blue, polished blue, steel and polished copper colour variants. At the event, HMD Global is expected to throw more light on its availability and launch offers.