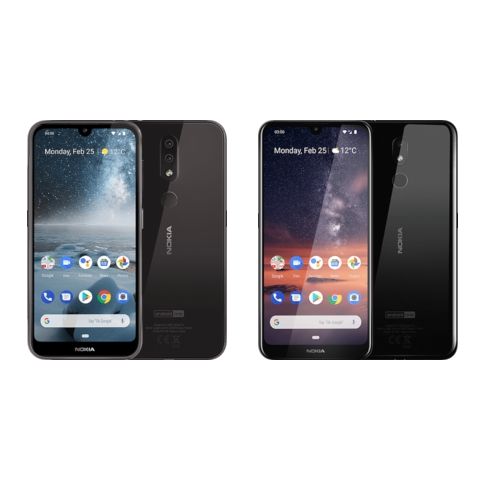 The phones are speculated to be announced soon in the country.

The two devices feature a U-notch on top of the display and come with a dedicated Google Assistant key.

Nokia unveiled two new budget phones at Mobile World Congress this year, the Nokia 4.2(₹ 10168 at flipkart) and the Nokia 3.2. It seems like the new handsets are headed to the Indian market since they are listed on the company’s India website. However, there is no information on what the phones could be priced at since there are no pricing or availability details listed on the Nokia website. Both, the Nokia 4.2 and the Nokia 3.2 are the company’s mid-range handsets that sport a U-shaped notch display design and come equipped with relatively large batteries for devices with their kind of specifications.

The Nokia 4.2 is powered by the Qualcomm Snapdragon 439 and features a 5.71-inch HD+ LCD display with a U-shaped notch. The handset is listed in 2GB/16GB and 3GB/32GB memory/storage models and the storage is also expandable up to 400GB via MicroSD card. The phone was announced running on Android 9 Pie and like all Nokia devices, is an Android One handset. It also features a breathing notification light on the power button, along with a dedicated Google Assistant button. It also supports face unlock and comes with a rear-mounted fingerprint sensor.

The Nokia 4.2 has a dual rear camera assembly. It sports a 13MP camera on the back with an f/2.2 aperture lens and it is paired with a 2MP depth sensor that gets an f/2.2 aperture. The device’s camera supports PDAF as well. The device is said to come with NFC support in some regions and it seems like the one being launched in India would also come with the feature. The device is backed by a 3000mAh battery that can be charged via a micro USB port. The global average price of the handset is set at $169 (Rs 12,005 approx) and it is listed on Nokia India’s website in Pink Sand and Black colour variants.

The Nokia 3.2 sports a larger 6.26-inch HD+ display but also has the same breathing light power button notification light and a U-shaped notch. It is powered by the Snapdragon 429 SoC and is listed to come in 2GB and 3GB RAM models with 16GB and 32GB of internal storage respectively. The phone is backed by a large 4000mAh battery but sports a Micro USB charging port instead of a Type-C port. The Nokia 3.2 is also an Android One phone that is running on Android 9 Pie. It comes with a dedicated Google Assistant button as well.

The Nokia 3.2 sports a single camera on the back, which consists of a 13MP sensor with f/2.2 aperture. On the front, it features an 8MP camera with f/2.2 aperture and 77-degree FOV, which supports face unlock. The device is listed in Black and Steel colour variants and was announced with a global average retail price of $139 (Rs 9,873 approx).

Read our first impressions on the two phones here.