The Asus Zenfone 5 Lite, 5 and 5Z will launch in March, April and June respectively 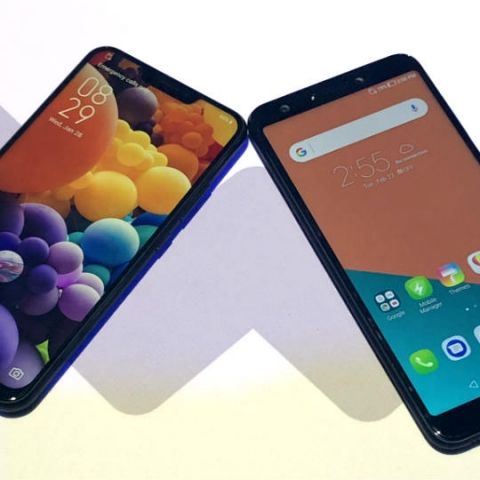 Asus has today announced its latest Zenfone 5 series smartphone at the Mobile World Congress 2018. The smartphone manufacturer has unveiled the Asus Zenfone 5 Lite, Zenfone 5 and the Zenfone 5Z. The company’s flagship Zenfone 5Z was the major highlight of the event and it comes with a plethora of AI-based features which are integrated with the ZenUI 5. All the three smartphones come with a thin-bezel design and most of the specs on the Zenfone 5 and the Zenfone 5Z are the same, except for the difference in SoCs used. Also, all three phones are running on Android 8.0 Oreo which is layered under Asus’ ZenUI 5.

Starting with the company’s flagship model, the Zenfone 5Z is powered by the Qualcomm Snapdragon 845 SoC and will be available in three memory options. It will be available in a 4GB RAM/64GB ROM, 6GB RAM/128GB storage, and 8GB RAM/256GB onboard storage variants. The smartphone features a 6.2-inch all-screen full-HD+ display with a 19:9 display aspect ratio. The top of its display sports an iPhone X-like notch, which the company says is 26 percent smaller than Apple’s flagship device. The Zenfone 5Z sports a 90 percent screen-to-body ratio.

The notch on the Asus ZenFone 5 houses a proximity/light sensor, an LED indicator, and the front-facing camera. Also, Asus claims that the device intelligently resizes any content on the screen to hide the notch, thus resizing the 19:9 display to the standard 18:9 display aspect ratio. On the rear, it features a dual camera setup and comes with a 12MP Sony IMX363 image sensor combined with a f/1.8 aperture lens. The camera is aided by AI scene detection, which is capable of detecting 16 types of scenarios. On the front, the phone features an 8MP camera with f/2.0 aperture. The smartphone also supports stereo audio and Asus has employed an NXP Smart AMP to enhance the sound further.

Next up we have the Asus Zenfone 5, which is similar to the Asus Zenfone 5Z. The phone features a similar notch design on the top of its display and a glass back but is powered by a Snapdragon 636 SoC. It will be available with up to 6GB RAM and comes with a similar dual stereo speaker setup. The camera setup is also identical as that on the Zenfone 5Z.

The Asus Zenfone 5 Lite is the smaller variant of the Zenfone 5. It is powered by the Qualcomm Snapdragon 430 chipset and will be available in a 2GB RAM/16GB storage model and also a 3GB RAM and 32GB ROM variant. The phone features a 6-inch univisium display with a resolution of 2160 x 1080 pixels. On the camera front, the device features a quad camera setup, two on the back and two on the front. The primary camera on the rear uses a 16MP Sony sensor and at the front, it is equipped with a 20MP camera. Both camera setups allow for 120-degree wide angle pictures. The device will also be available in a Snapdragon 630 variant and is backed by a 3300mAh battery.