Moto Z4 leaks in entirety, to come with waterdrop notch

The image has been shared by tipster Evan Blass 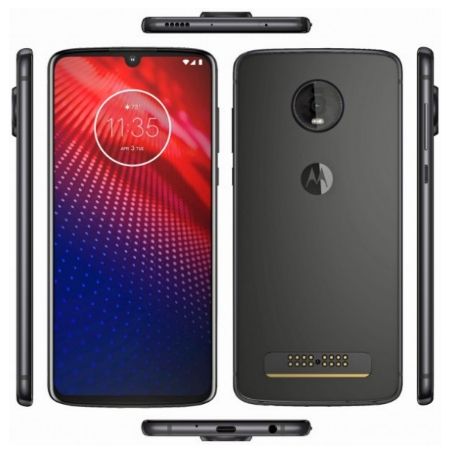 Motorola’s Moto Z4 has been leaked a few times in the past and now, another image of the phone has surfaced showing it from multiple angles. The image has been shared by famous tipster Evan Blass and it confirms what we already know so far. We can see the waterdrop notch on the edge-to-edge display that has a small chin. On the back is a protruding camera module with a single lens, Motorola’s signature bat-wing logo and pogo pins.

On the right edge, the phone has a volume rocker and a power button. At the bottom, there is a USB-C port, a 3.5 mm headphone jack, and a microphone. On the top edge, the Z4 has the secondary mic and a SIM card slot along with a speaker. There is no visible fingerprint scanner, so it is assumed that the phone will have an in-display sensor or it could be embedded in the batwing logo.

Previous reports have suggested that the Moto Z4 will have an in-display fingerprint sensor. The Moto Z4 Play is said to have a 48MP camera sensor, however, there is no information on the supplier. Currently, Sony and Samsung are the primary manufacturers to supply a 48MP sensor. On the front, the phone could have a 25MP selfie snapper. The phone is expected to sport a 6.4-inch OLED display. There are pogo pins on the back, and reportedly, the smartphone will also support the 5G Moto Mod.

Under the hood, the phone is expected to feature the Qualcomm Snapdragon 675 mobile platform that has been manufactured via a 11nm process. The SoC is said to be accompanied by 4GB and 6GB RAM, and 64GB and 128GB storage options. Like other Motorola phones, the company is expected to stick with the stock Android version, and the Moto Z4 Play is expected to run Android 9 Pie out-of-the-box. The phone is said to pack a 3600mAh battery with TurboCharge support.