The alleged Moto Z3 Play is seen featuring a 6-inch bezel-less display and is speculated to be powered by the Snapdragon 636 platform with 6GB RAM. 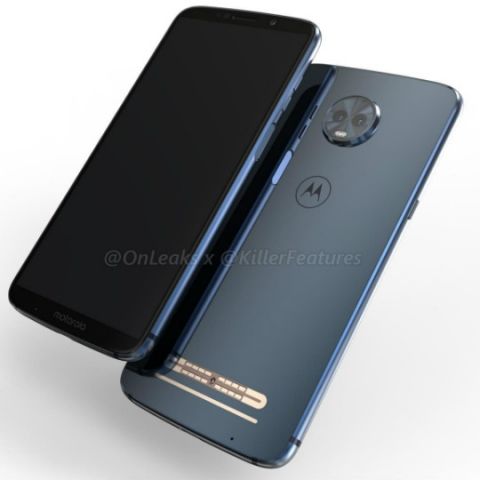 Lenovo owned Moto is showing all signs of working on its G6 lineup of smartphones which are expected to be unveiled soon. Now, the company’s upcoming flagship smartphone, the Moto Z3 Play, has allegedly leaked in a 360 degree render video. Steve H (@OnLeaks), in collaboration with KillerFeatures, has posted the video on Twitter. The overall design of what could be the Moto Z3 Play is not radically distinct from its predecessor, but the phone can be seen sporting a thin-bezel design and is expected to feature a 6-inch display.

The fingerprint sensor has also been relocated to the right edge of the handset to accommodate the taller screen. The power key is on the left edge, whereas the volume rockers sit at the right side of the device, above the fingerprint sensor. The Moto Z3 Play is said to measure 156.4 x 76.47 mm and the Moto Mods contact pins on the rear of the device are rectangular in shape this time around. The number of contact points remains the same, suggesting that the Moto Z3 Play will support all existing Moto Mods released till now. On the rear of the device, we see the Moto branding and a dual camera module. Additionally, there is a USB-C port at the bottom along with a 3.5mm audio jack and the SIM tray sits at the top of the mobile phone.

As per the report, the Moto Z3 Play will be powered by Qualcomm’s Snapdragon 636 SoC and might launch in two variants, one with 4GB RAM and 32GB storage, and another one with 6GB RAM and 64GB storage. In the camera department, the smartphone is speculated to sport 12MP + 8MP dual sensors on the rear and a 5MP shooter at the front. It could be backed by a 3000mAh battery and might be priced between $450 and $500 (around Rs 32,500, approx).