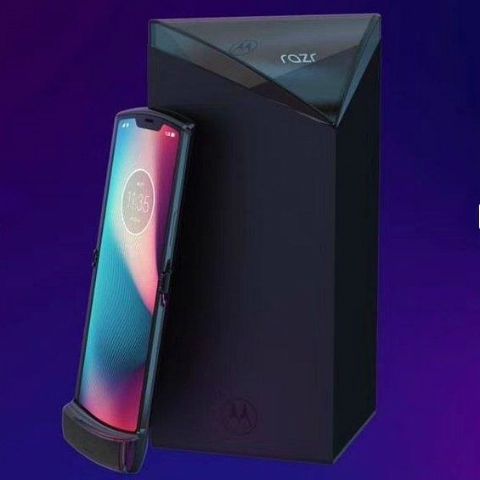 It shows that the phone may come in triangular prism-shaped box.

The phone will reportedly launch without the 3.5mm jack.

In January, several reports hinted at the rebirth of Motorola’s iconic clamshell phone, the Moto Razr, in a new Avatar. The phone, dubbed as the Motorola Razr V4, was reported to don a foldable screen while keeping the original design intact. Since then, many reports have given us an idea of how the phone could look like, but the latest leak not only confirms the rumoured design, it also delves out information about the contents of the box.

According to an image shared by SlashLeaks, the phone will come in a triangular prism-shaped box. It will reportedly contain a charging dock, a power adapter, a USB Type-A to USB Type-C cable, a 3.5mm dongle (hinting that there will be no headphone jack) and a pair of earbuds. Previous reports have suggested that the company has already designed a logo of the foldable phone codenamed “Voyager.”

Reportedly, the handset will be powered by the Qualcomm Snapdragon 710 processor, complemented by 4GB/6GB RAM and 64GB/128GB local storage. The GPU is said to be Qualcomm’s Adreno 616, and the phone is tipped to house a 2,730mAh battery. The primary display is likely to be a 6.20-inch OLED panel offering 876×2142 pixels resolution. The “closed” or secondary display is said to offer a resolution of 600×800 pixels.

It is speculated that the smartphone will support Motorola’s 27W TurboPower charging. The phone may be offered in white, black, and gold colors. On the software front, the phone is expected to run Android 9 Pie and come pre-installed with applications like Moto Display, Moto Actions, and the Moto Camera app. It may launch at starting price of $1,500. The first mention of a foldable Razr phone was observed in February last year, when Lenovo CEO, Yang Yuanqing talked about bringing the device back.