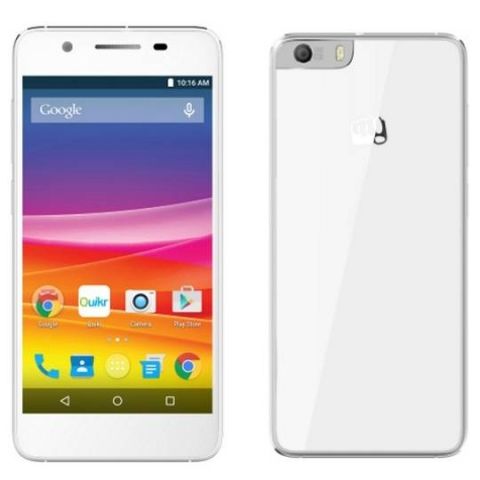 Micromax has launched its Canvas Knight 2 smartphone in India. Priced at Rs. 16,299, the Canvas Knight 2 comes with LTE 4G support. Micromax has tied up with Airtel to offer free a 4G Airtel SIM with the new phone. Airtel is offering a Double Data offer, which doubles the 4G data amount on activating the 4G SIM. The smartphone goes on sale on Wednesday next week.

The Canvas Knight 2, successor to the Canvas Knight launched last year, comes with a 5-inch 720p display with Gorilla Glass 3 protection. The smartphone runs Android 5.0 Lollipop and is powered by a 64-bit Qualcomm Snapdragon 615 octa-core along with 2GB of RAM. The Canvas Knight 2 comes with a microSD slot that supports storage up to 32GB. In the camera department, the Knight 2 has a 13MP rear snapper with auto focus, Sony IMX214 CMOS sensor and a Largan 5P lens, and 5MP front-facing camera. The smartphone features Cirrus Logic Wolfson Stereo WM8998 audio. A 2260 mAh battery powers the phone. Micromax is offering a slew of preloaded apps such as Apps Center, Snapdeal, SwiftKey, Chaatz, CleanMaster, Newshunt, Quikr, and Hotstar.

"With the launch of our new device Canvas Knight 2, the first in the 4G range, we are looking at driving the next wave of internet evolution in the country. Over the next few months, we are all set to launch a series of 4G LTE enabled devices across a range of price points each addressing unique needs of the Indian consumer. Our popular series of Canvas Fire, Unite, Nitro will gradually move to 4G offerings. With a comprehensive portfolio of quality 4G LTE-enabled devices, we are confident of propelling the next wave of mobile internet ecosystem in the country,” says Vineet Taneja, CEO, Micromax Informatics.

Micromax has also launched a variant of the Canvas Knight, called the Cameo, with octa-core processor. Priced at Rs. 11,490, the phone features a 4.7-inch IPS display with 1280 x 720 pixels resolution, 8MP rear camera with flash and 5MP front facing camera, 8GB of storage, expandable up to 32GB.