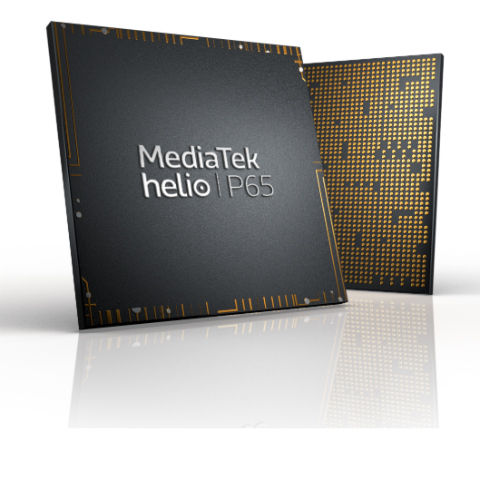 With an aim to deliver “big performance,” “big cameras” and “great gaming” Taiwanese semiconductor company MediaTek has launched the Helio P65 processor. The company says that chipset mixes big Arm core performance and a new Arm G52-class GPU that delivers up to 25 percent faster gaming performance versus competitors that use older generation cores. The P65 incorporates a pair of Arm Cortex-A75 CPUs operating up to 2GHz, and six Cortex-A55 processors. MediaTek says it has also separated the audio channels for voice commands and calls from media and games for better quality.

When it comes to the AI-performance, MediaTek claims that the Helio P65 chipset’s performance has been improved 2X compared to the previous generation mainstream Helio series. It also says that the processor offers up to 30 percent faster performance versus direct competitor SoCs in AI-camera tasks such as object recognition (Google Lens), Smart Photo Album, scene detection and segmentation with background removal, and single or dual camera Bokeh shots.

In the camera department, the MediaTek Helio P65 enables dual camera systems up to 16MP+16MP with flexibility for wide/tele lenses. “Alternatively, brands can go super-sized and use a single 48MP, 4-cell camera as a key differentiator. A new, secure ISP design means facial recognition actions such as smartphone unlocking are ultra-fast, highly accurate and add a new layer of security,” the company said.

“We’ve created our most accurate GNSS & positioning engine ever. Its upgraded inertial navigation engine compensates when indoors, underground or driving through tunnels. With the ability to understand its orientation and direction, the P65 can be placed or held in any position – separating orientation from inertial readings when GNSS is unavailable,” the company added.